Three big and beautiful industrial gears from Mike at Funk and Swagger Antiques in Huntington, NY got my wheels turning. 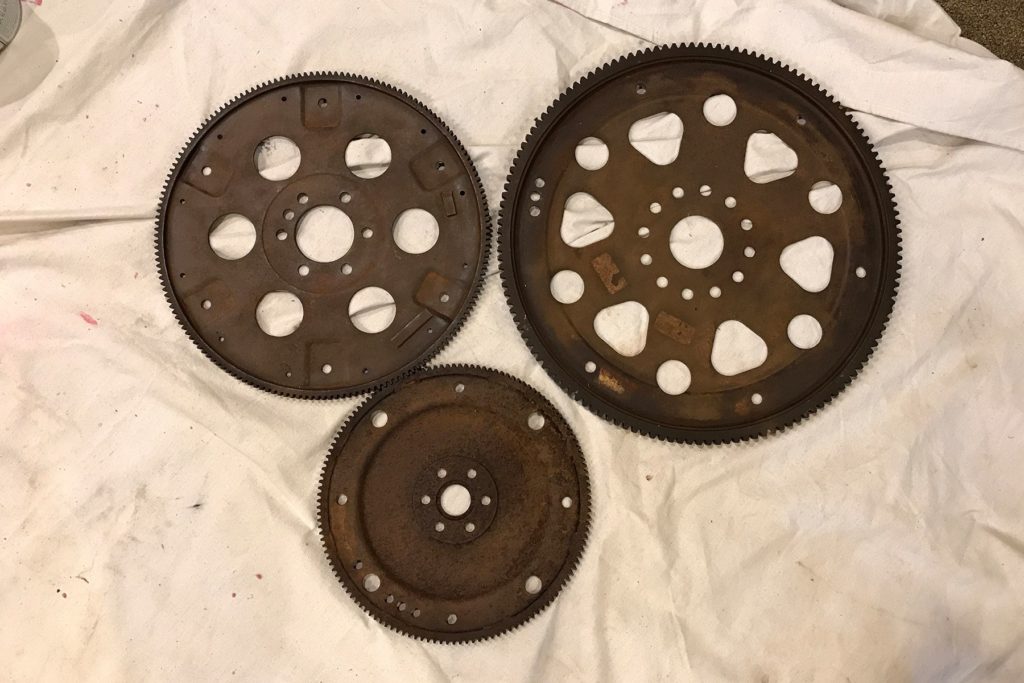 I knew the largest one, 17.5 inches in diameter, would become the top of a coffee table. Geared up for this big idea, I commandeered the base from an old industrial stool …

… and spray painted what would become the coffee table legs. 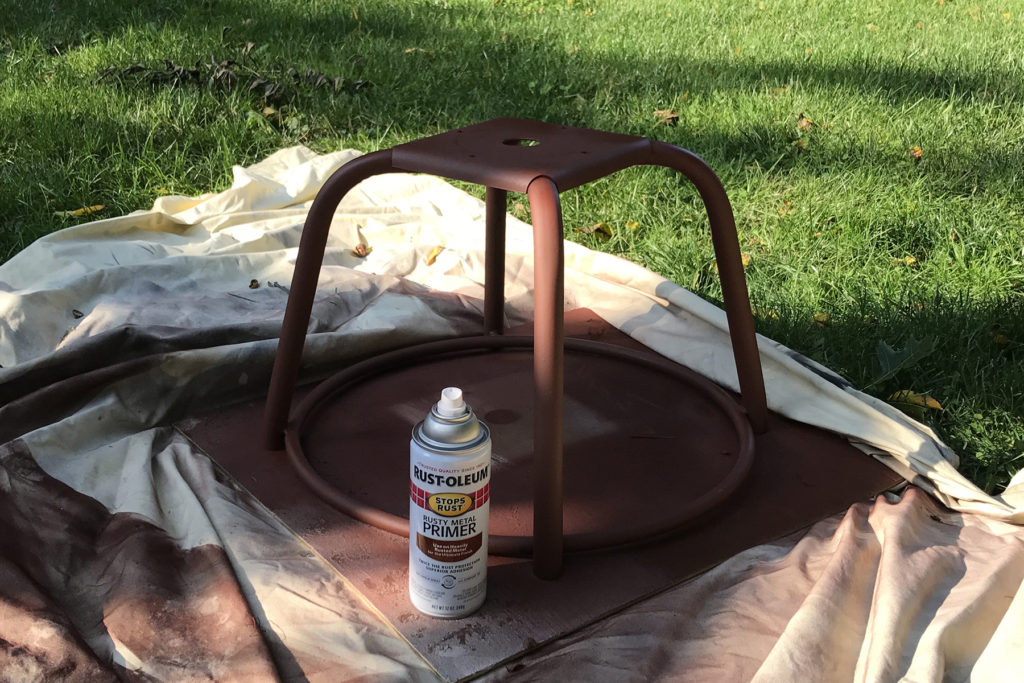 It looked a little boring so I broke out the Rub ‘n Buff wax, rubbing on patches of bronze and black. 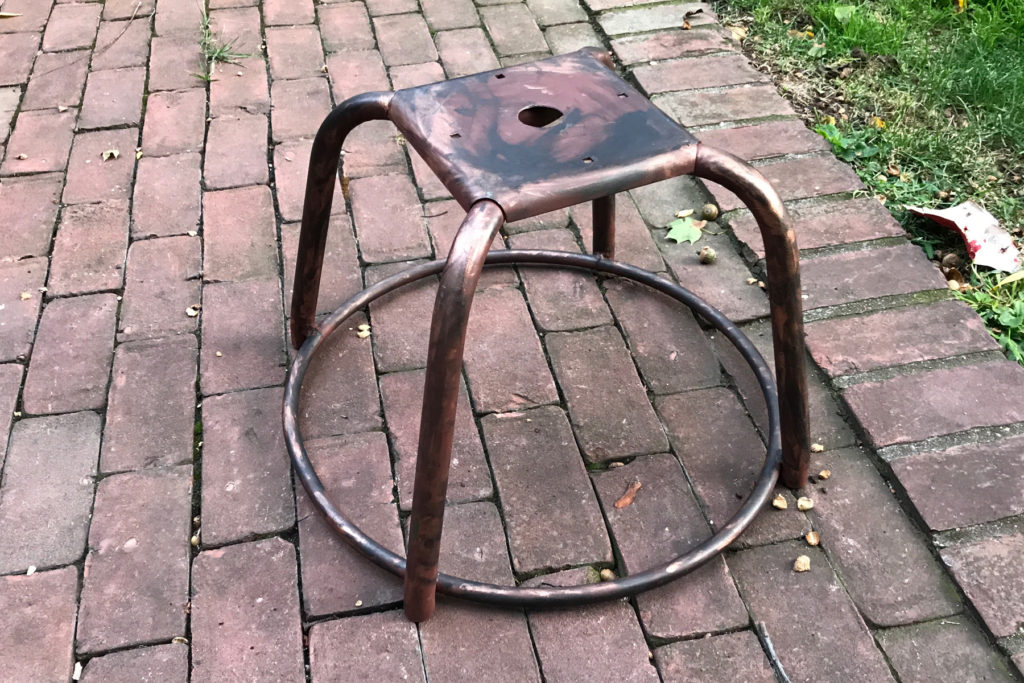 The next problem was finding a way to secure the gear to the base. For this, I anxiously awaited the next meet-up of the Long Island Makerspace. It’s a group of people who, well, like to make stuff. We meet in a small industrial plant with access to, among other goodies, a 130 watt CO2 Laser Cutter.

Oh, I was itching for my turn with that baby! As a novice, circles seemed like a good start. 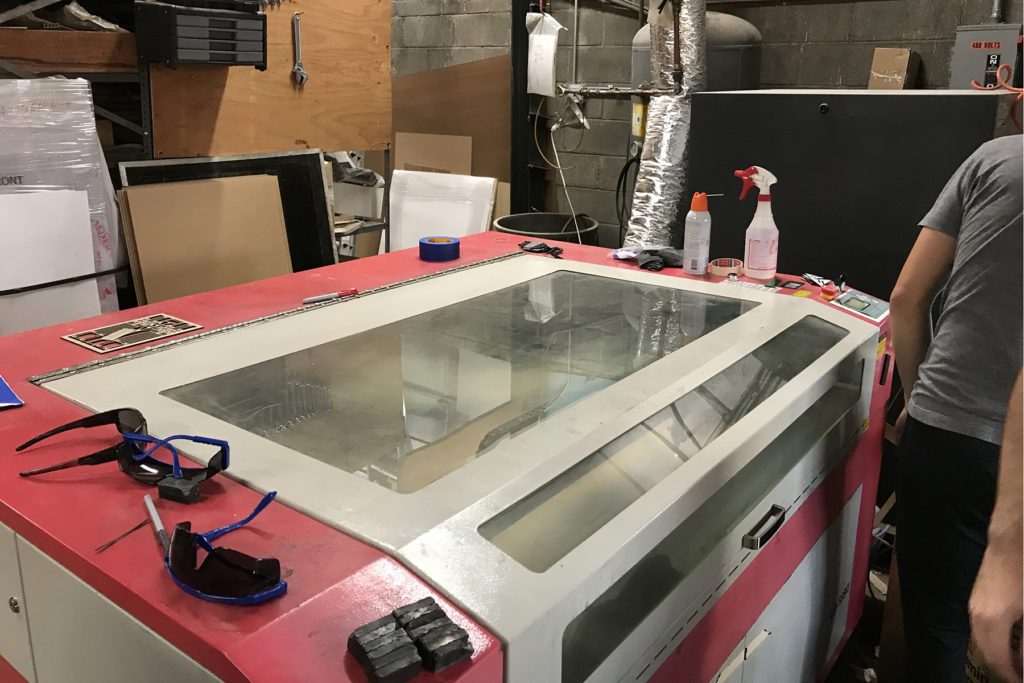 With a little help, I programed the laser to cut a few perfectly perfect circles from a melamine panel. 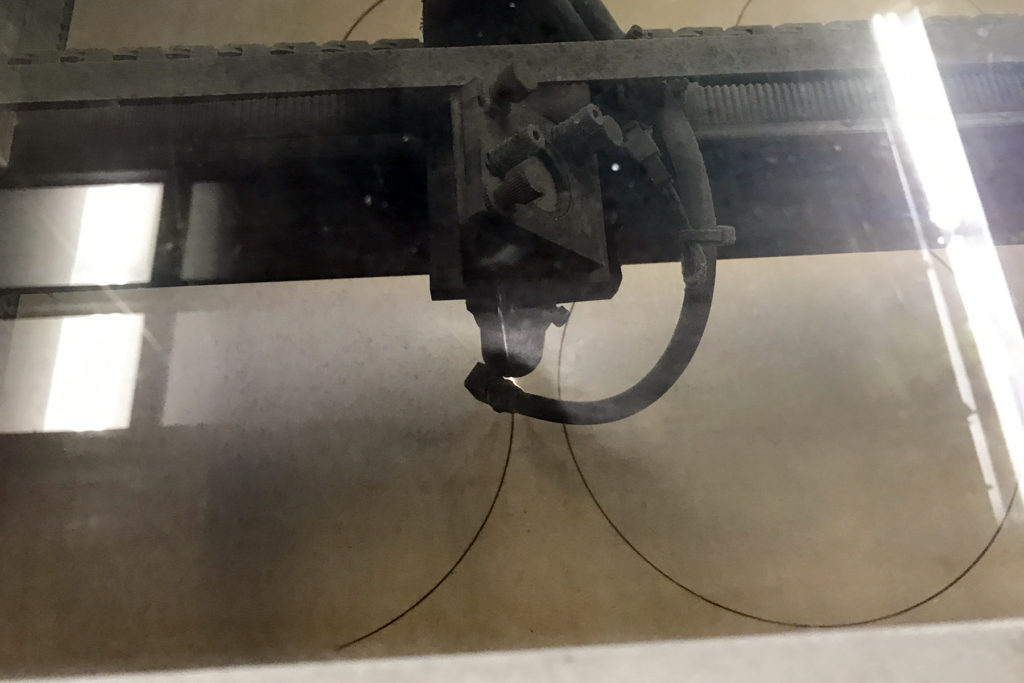 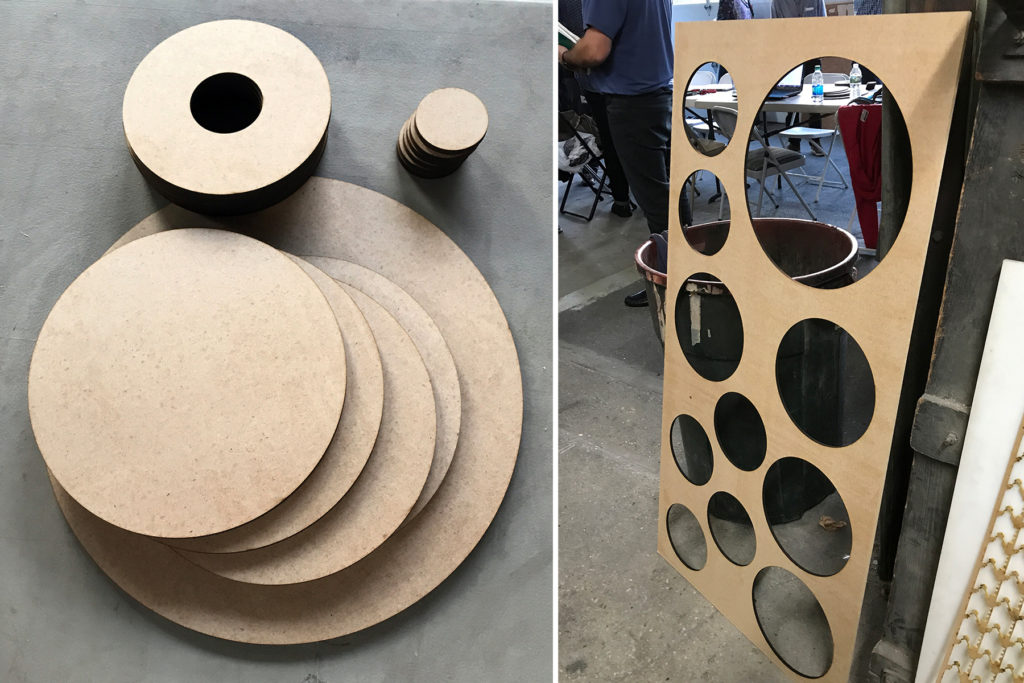 No, I wouldn’t be rounding up all of these disks for my gear table. I just needed the six “doughnuts” I’d cut. I frosted them with wood glue and stacked them up like a layer cake.

When dry, the glued layers received the same paint and wax treatment as the base. 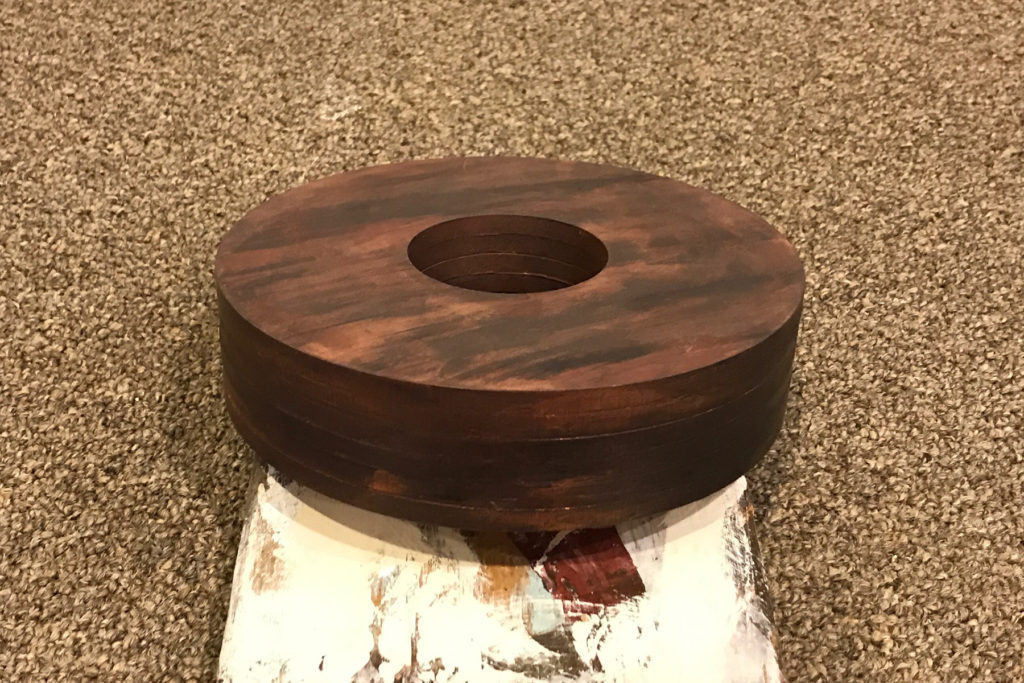 Four existing holes in the base made an easy job of screwing the base to the melamine from underneath.

Not only would this laser-cut-layer-cake pull the base and the gear together, it would add a few needed inches to the height of the table.

The rough feet of the base needed rubber tips. I had to cut them with a utility knife to make them fit. Not beautiful, but they did the job. 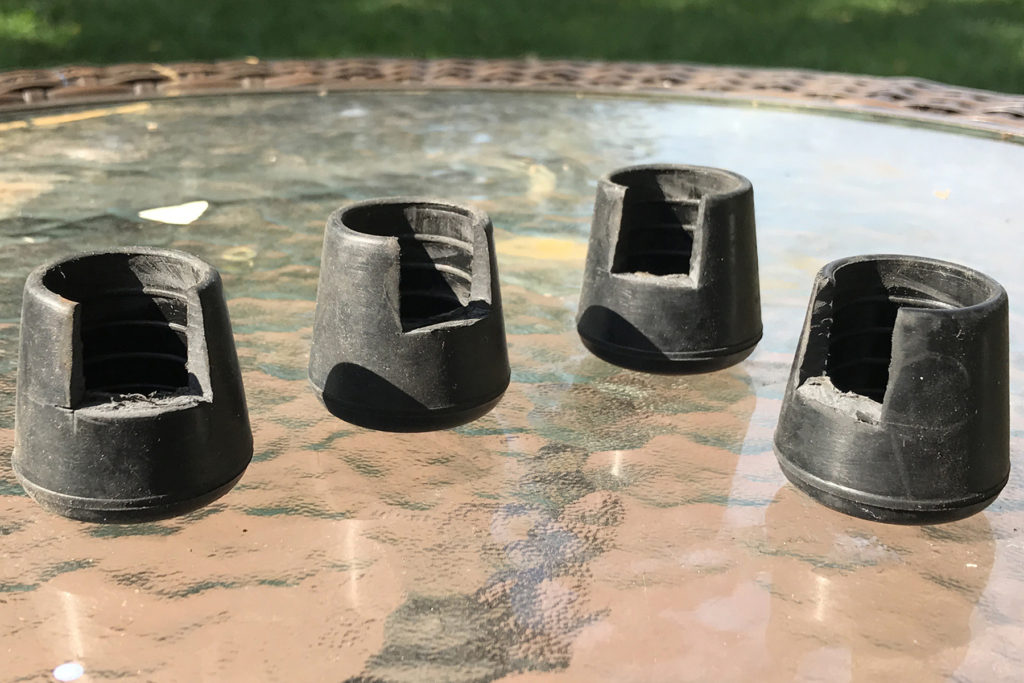 Four screws with washers, camouflaged with a repeat application of paint and wax, secured the gear to the top.

In anticipation of the final step, I pressed eight self-adhesive plastic “buttons” around the rim.

There wasn’t a structural purpose for a center-hole design, but I liked how it looked. 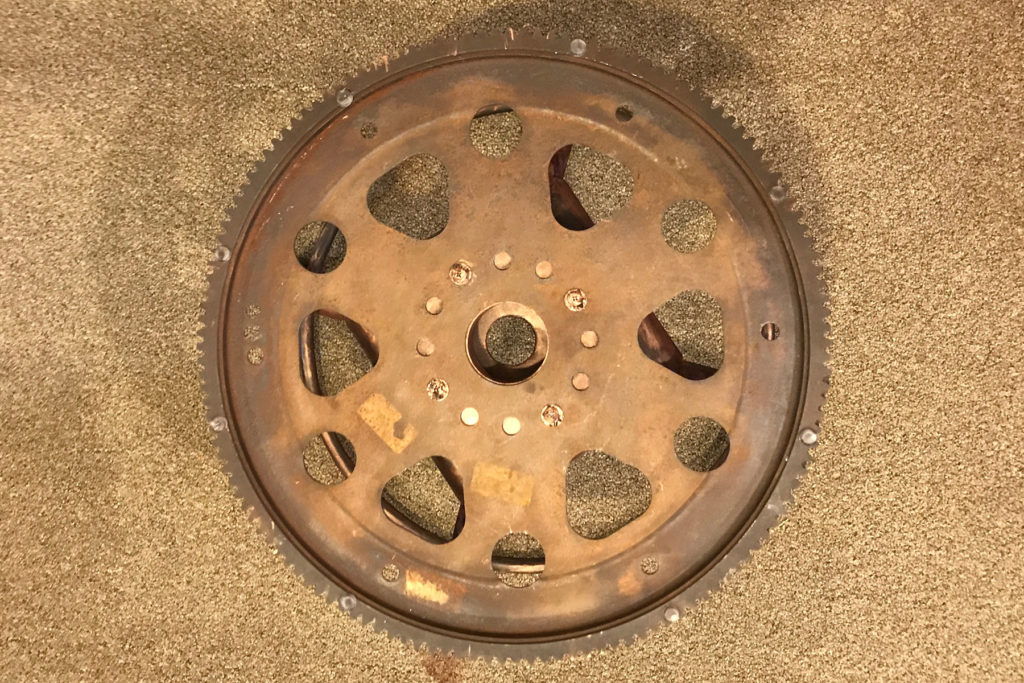 For a little more bling, I iced the gear tips with Rub ‘n Buff bronze. 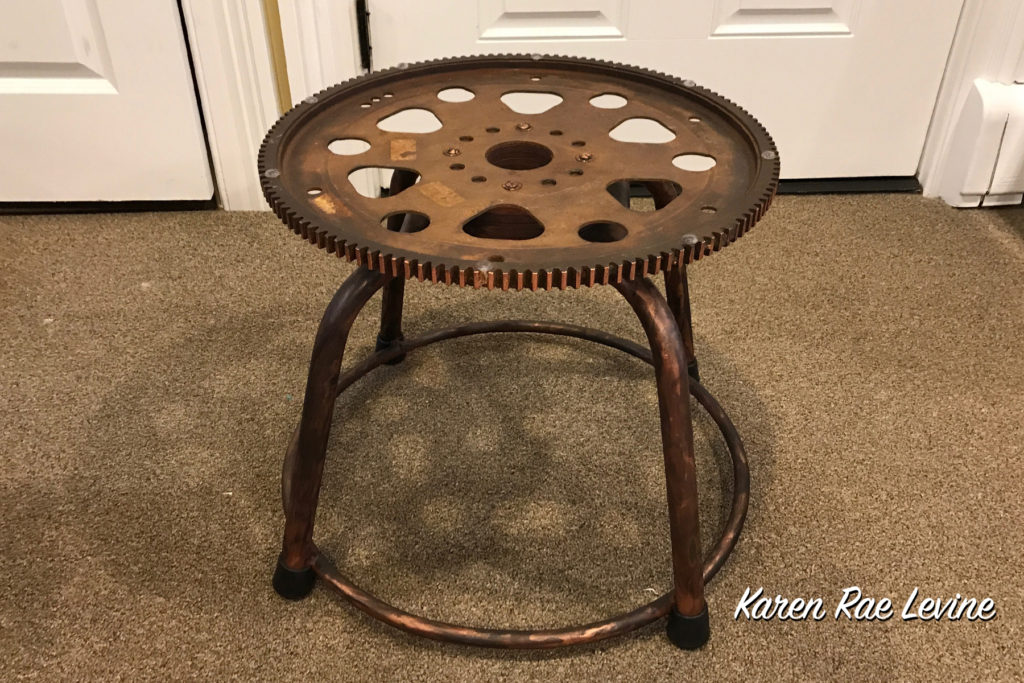 The final step is a 24″ inches in diameter, 3/8″ tempered glass top I purchased from Noel at Awesome Glass in Huntington Station, NY.

All in all, a piece of cake!

The top told me it needed to be a backgammon table. (Furniture talks to me. Don’t ask.) 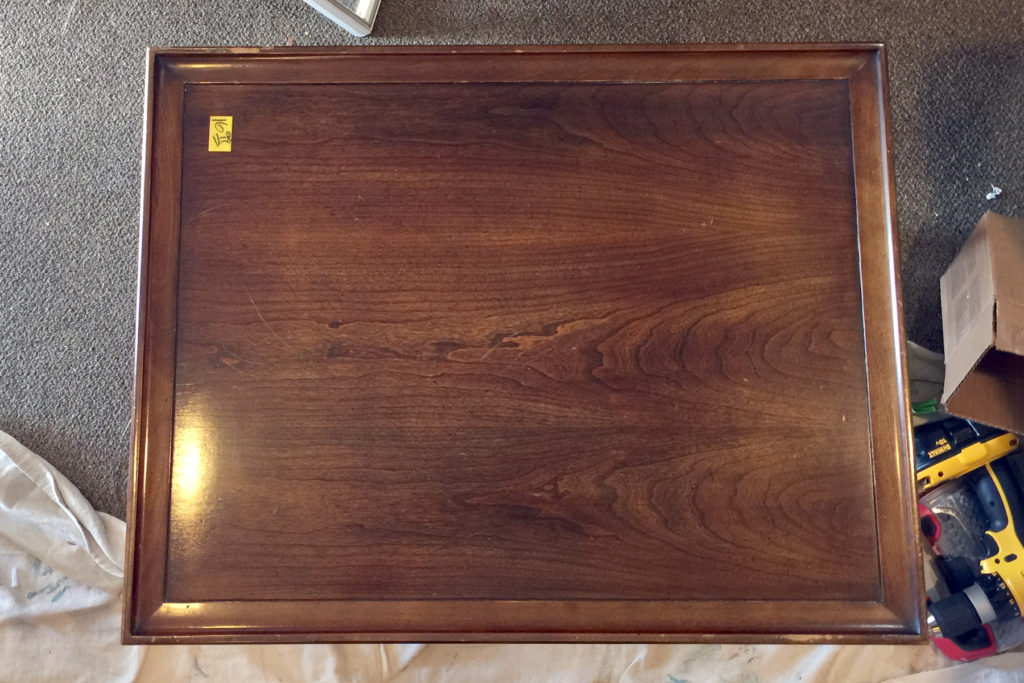 My backgammon idea challenged me for quite a while. I’d run through all kinds of color and design options in my head but none of them seemed right. It wasn’t until I took a General Finishes class at Suite Pieces that I knew glazing was the answer. 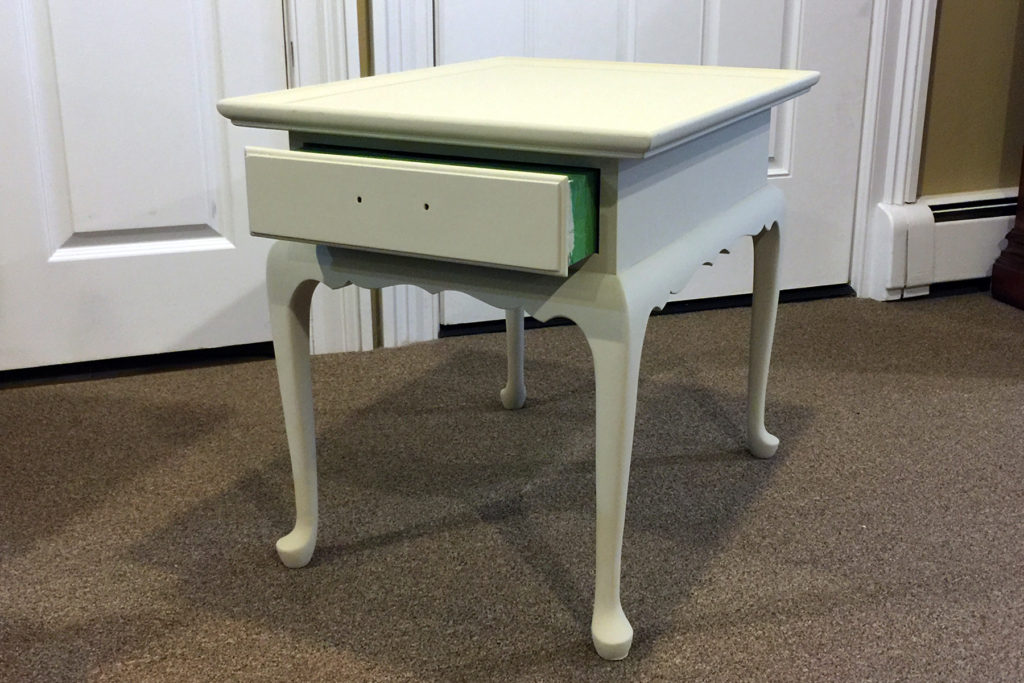 With a light distressing and some clear wax, I could have stopped there, but of course I didn’t.

For a two-tone look, I taped the edges of the top and the sides to get them ready for a glaze finish. The first step was a coat of Artisan Enhancements Scumble. Scumble is a water-based extender. It keeps the glaze wet longer so the glaze goes on smooth and there’s more time to “play” with it.

The Scumble has a sheen when it goes on. I tilted the table in the light to find the sheen and make sure it covered the entire surface that would be glazed.

I brushed on the glaze, a 1:1 mixture of General Finishes Water Based Glaze Effect colors Van Dyke Brown and Winter White. I used a chip brush to move the glaze in straight(ish) lines along the top … 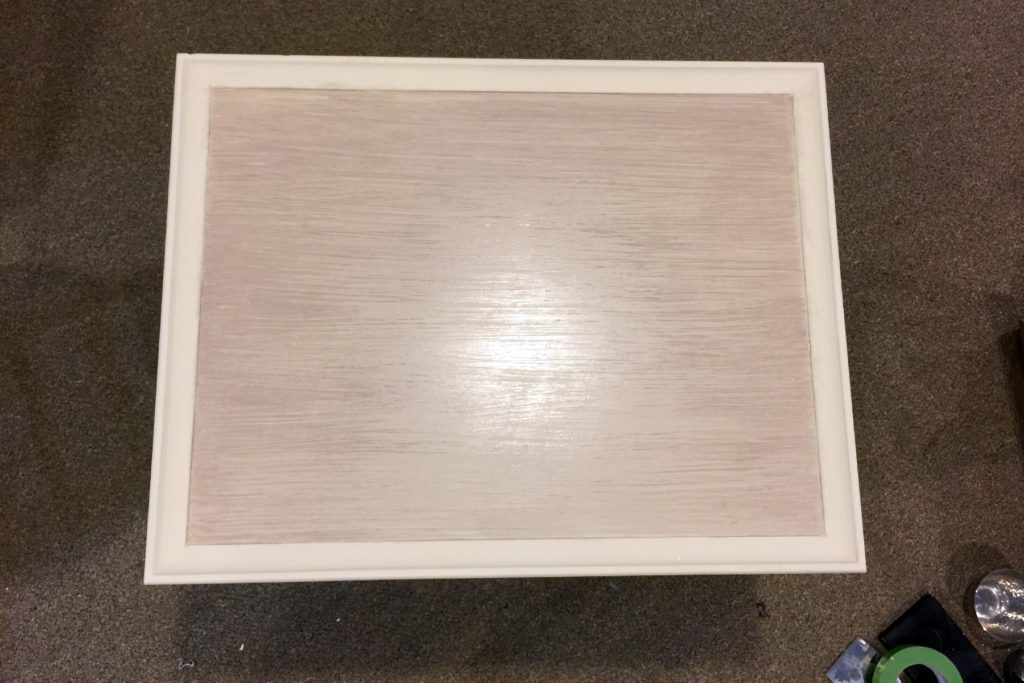 … and across the drawer, and the sides. 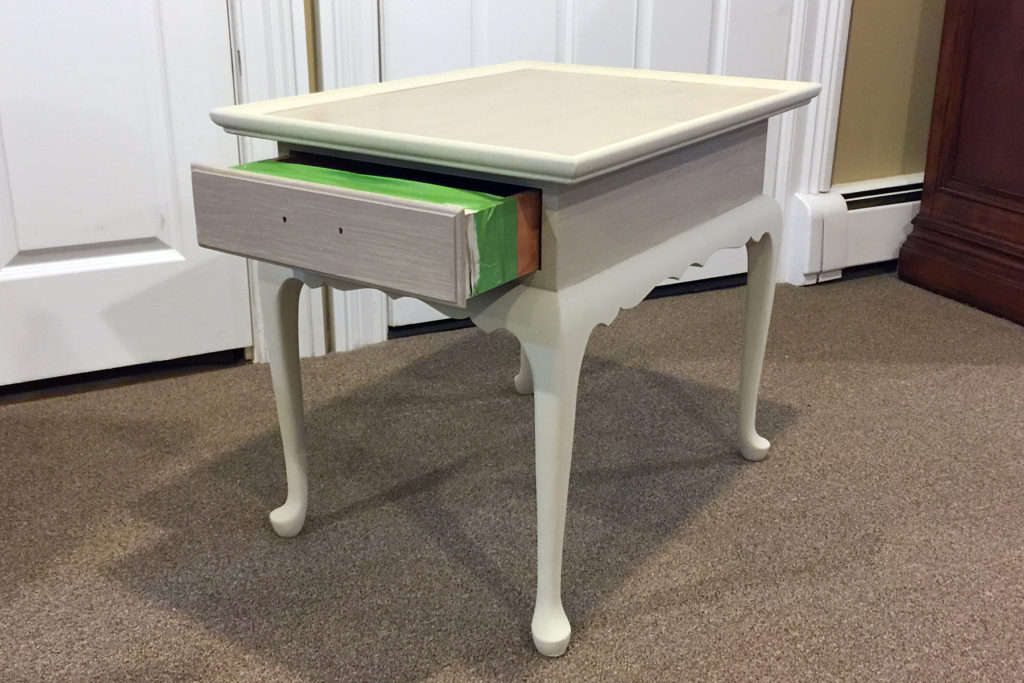 I let the glaze dry overnight, then taped off the glaze I’d already applied. On went the Scumble and the glaze in Van Dyke Brown. Again, I used a chip brush to move the glaze in the direction I wanted. On the top, I followed the shape of the rim. On the bottom, I brushed downward and followed the line of the legs. 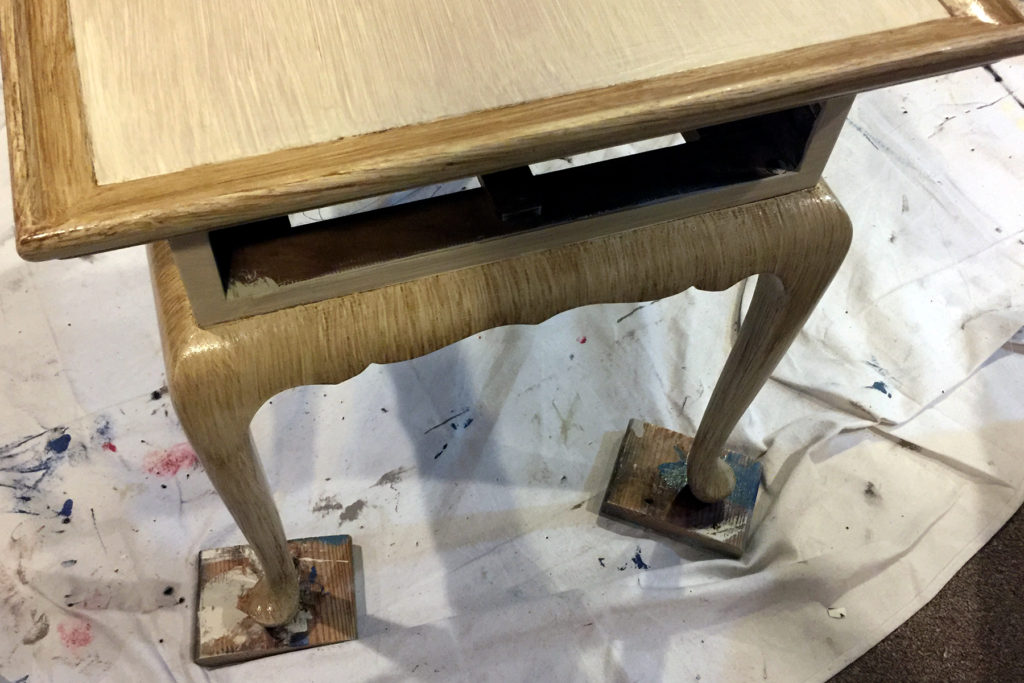 I changed the drawer pull and could have stopped then, but of course I didn’t.

I mapped out the backgammon triangles in Photoshop. I had a few different options to apply them. I could decoupage paper triangles, transfer images that had a triangle shape, make my own triangle stencil, or tape and glaze. I decided to tape and glaze.

I taped the table top and used graphite paper, pencil and ruler to trace my triangles onto the tape. 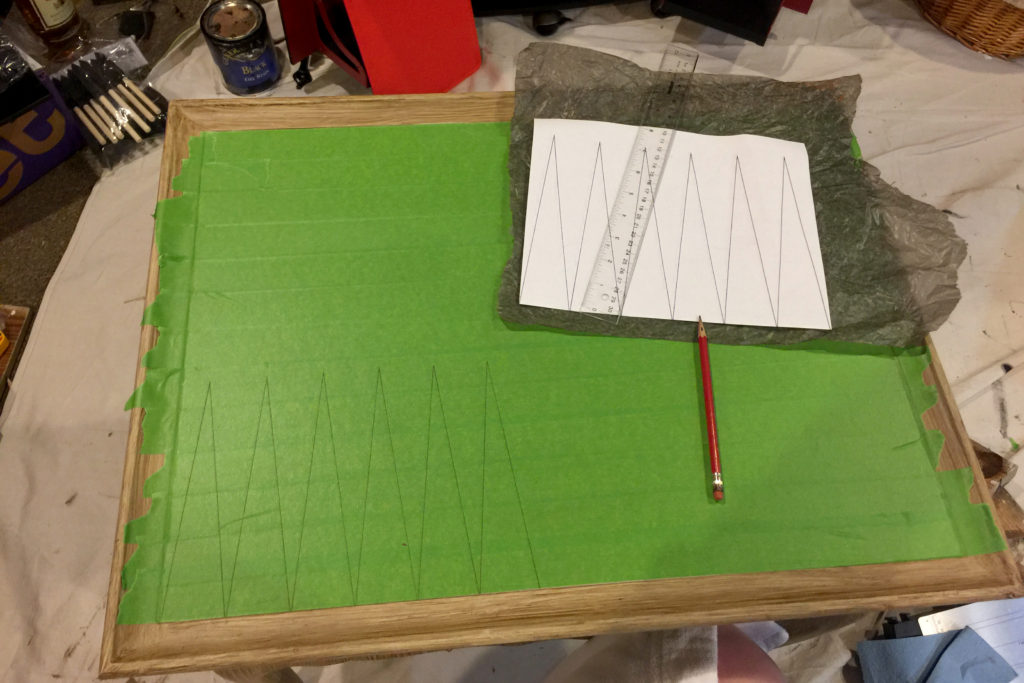 (I should buy stock in FrogTape Brand painter’s tape. I think I’m keeping them in business.)

I used a ruler and exacto knife to cut the tape around every other triangle. 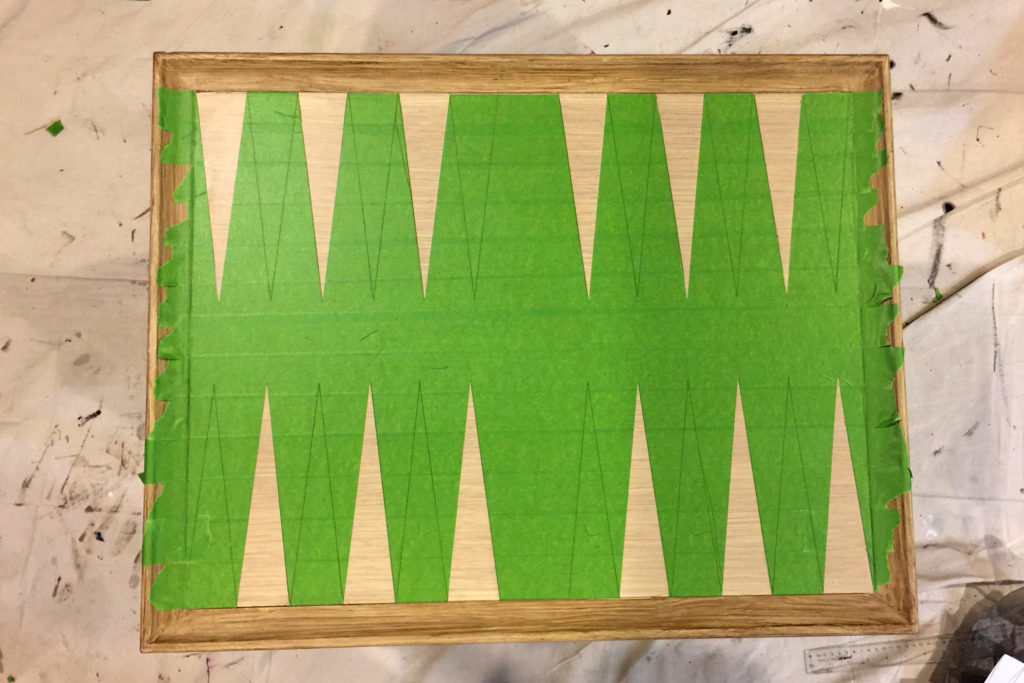 I applied Scumble and Van Dyke Brown glaze. This time I brushed a cross hatch pattern, stroking the glaze first along the triangles and then across them. 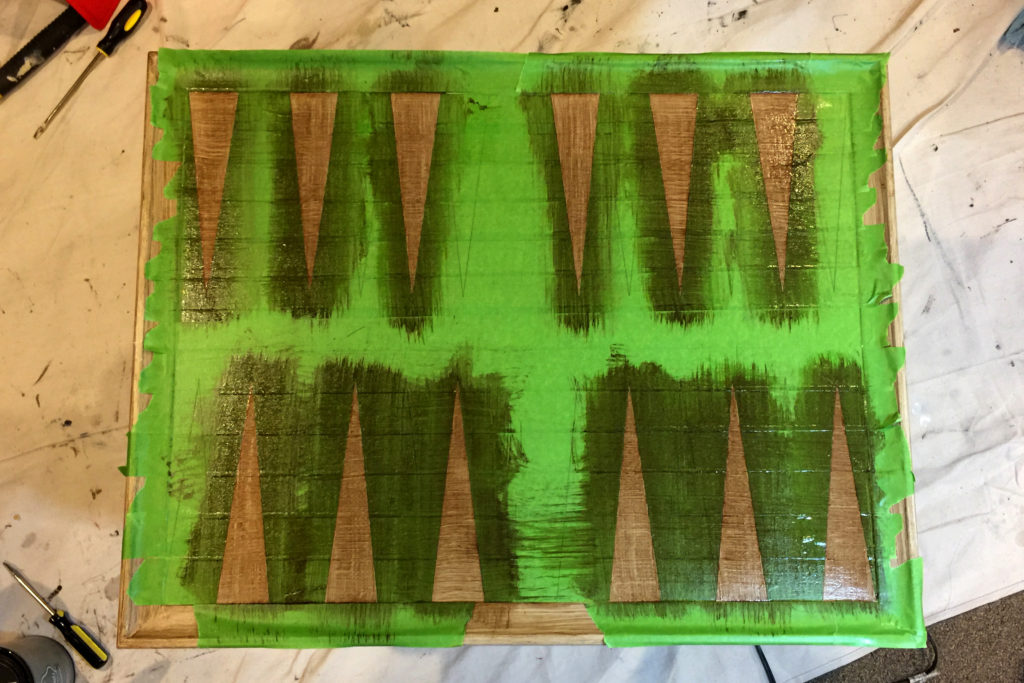 In the photo above, you can see a little smudge on the bottom where I forgot to tape. I caught it while it was still wet, and wiped it off with a damp paper towel. The advantage to glaze is that it leaves a nonporous topcoat. Bare chalk paint would have absorbed that little goof and I would have had to paint over it.

The following day, I used my ruler and exacto knife to cut out the triangles that would receive a lighter glaze. I applied a fairly heavy coat of Winter White and with a damp paper towel, carefully wiped the glaze from each dark triangle. 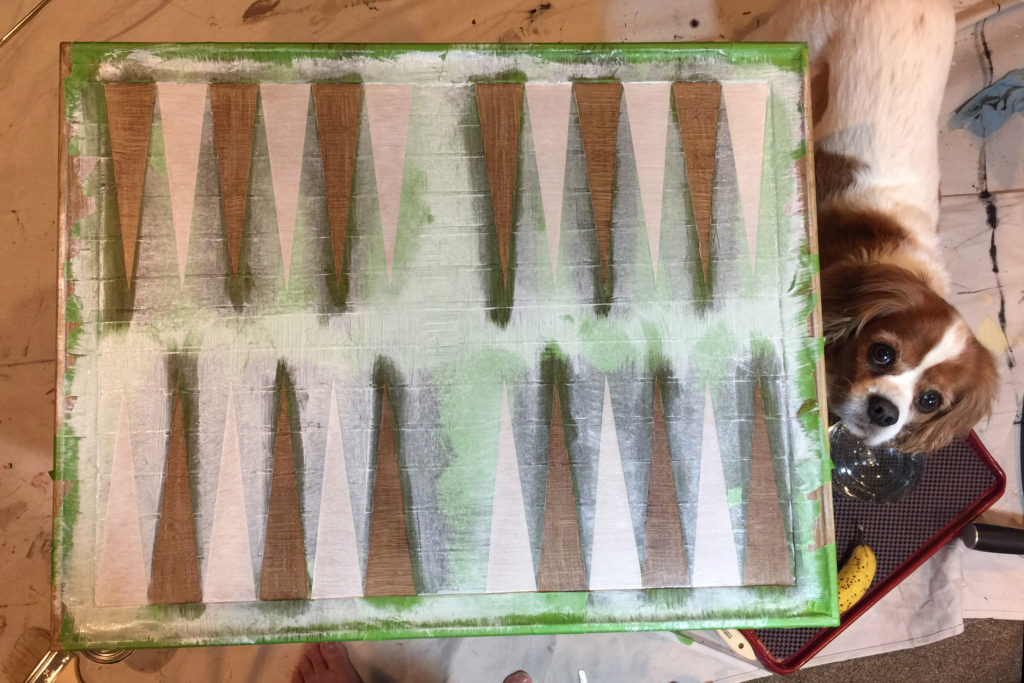 Photo bomb by my “helper,” Charlie

Because the coat of white glaze was heavier, I removed the tape right away so that I could catch and wipe away any glaze that had seeped through the tape. 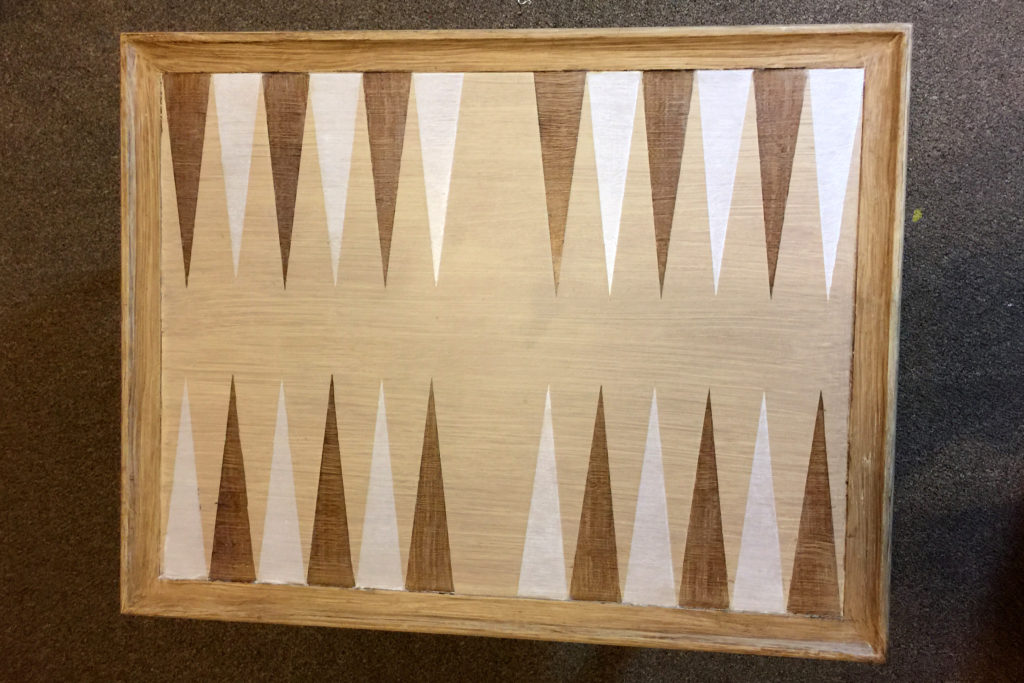 There were a few times during the process I could have stopped and still had a nice looking table, but I’m glad I kept going. 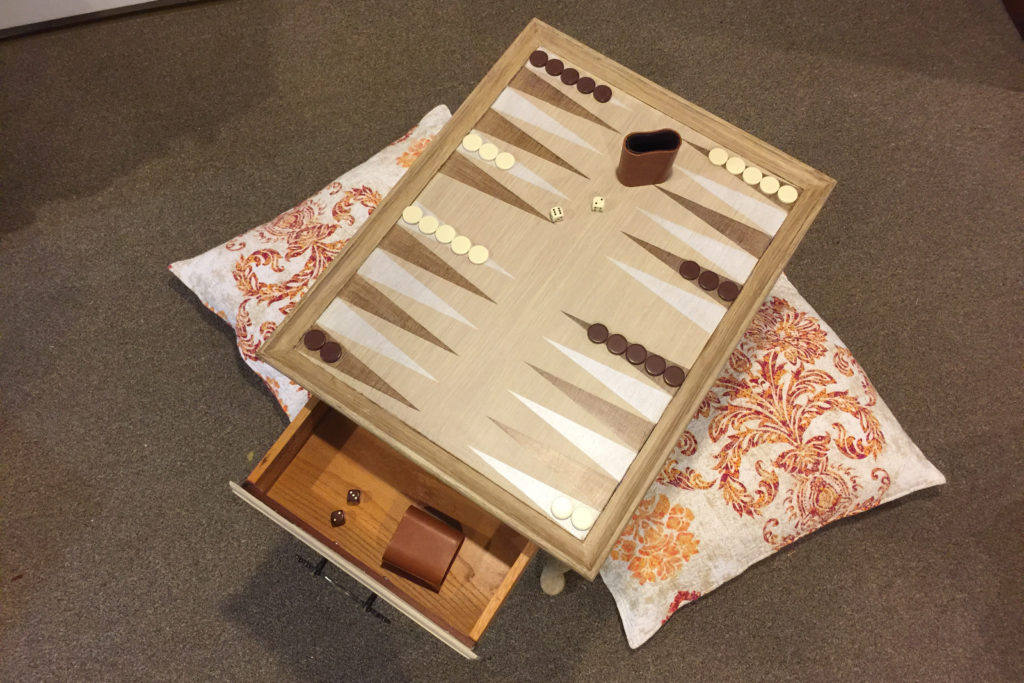