I wanted to make a portable, compact bar unit to help my son entertain in his small apartment. The designs I came across reminded me of the media cabinets my generation used to organize VCR tapes. And I found one. 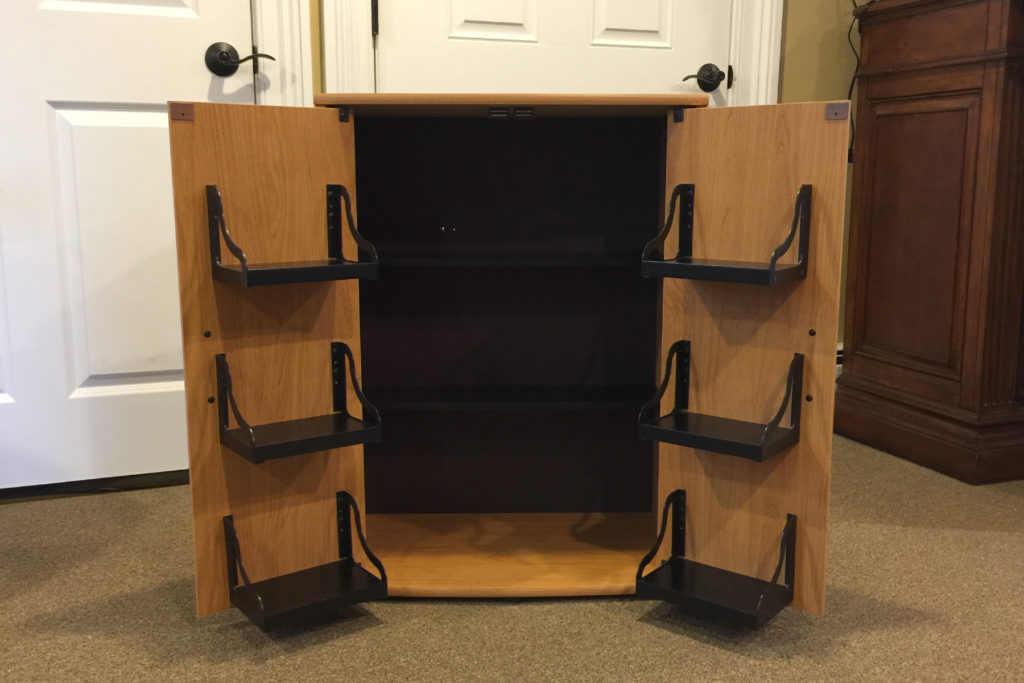 The cardboard back needed to be replaced with sturdier particle board, and for ease of painting, I took the doors off too. 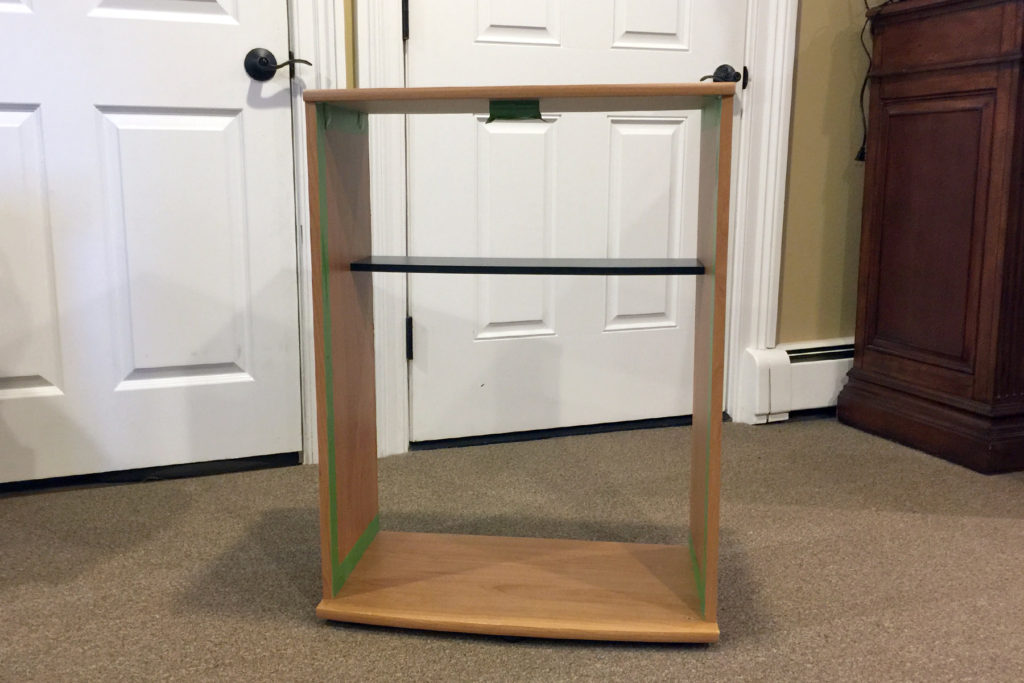 It was so much easier to paint everything separately. If I had nailed the panel to the back and then painted, I would have had a lot more pesky corners to deal with.

The colors of choice were Annie Sloan Emperor’s Silk and Graphite. 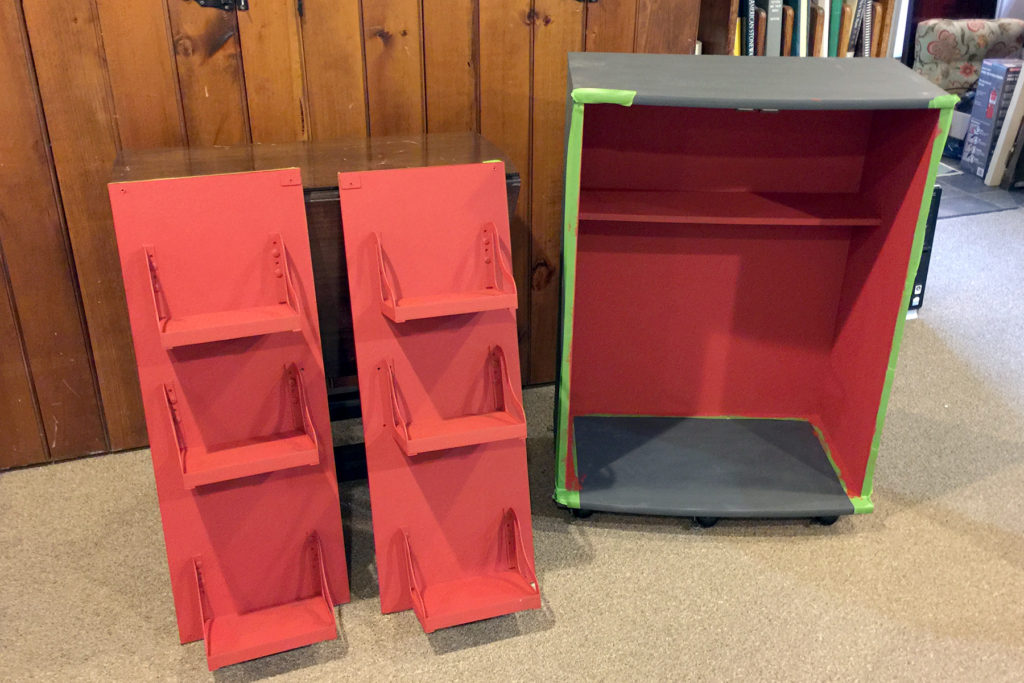 For the bottom and exterior I wanted a deeper black. For this I used Artisan Enhancements Scumble and General Finishes Glaze Effects in Pitch Black, making long even strokes over the paint with a chip brush.  Scumble keeps the glaze wet longer so there’s more time to “play” with it. (You can read more about this glazing technique in Backgammon Anyone?) 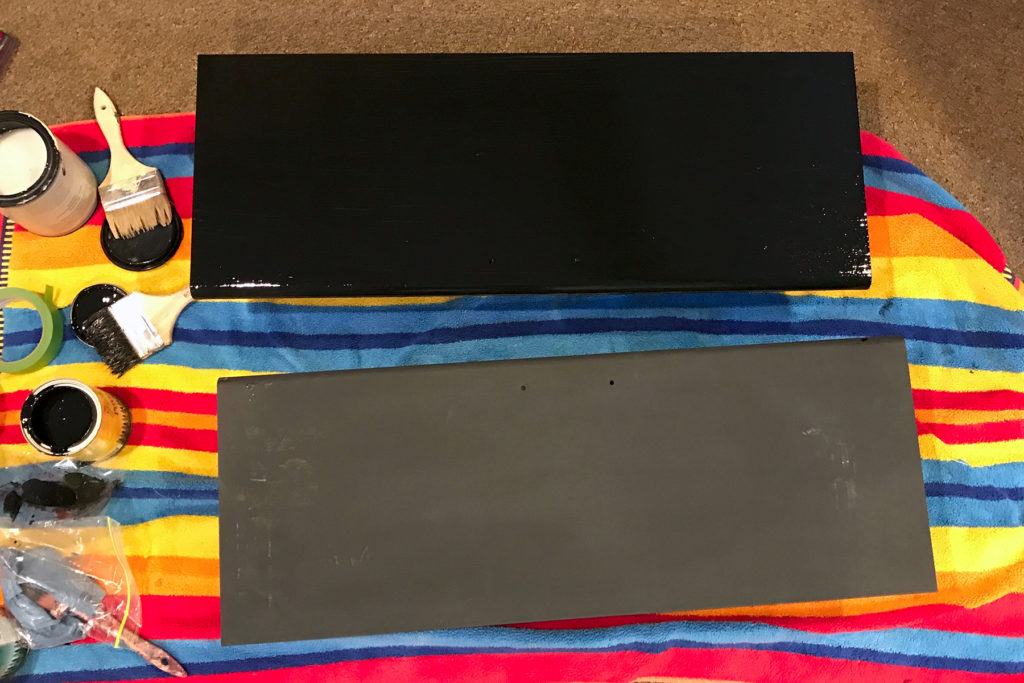 Exterior of the cabinet doors. One door with black glaze and the other without.

To give the interior some shine, I sealed the red paint with Satin-finish General Finishes Topcoat. 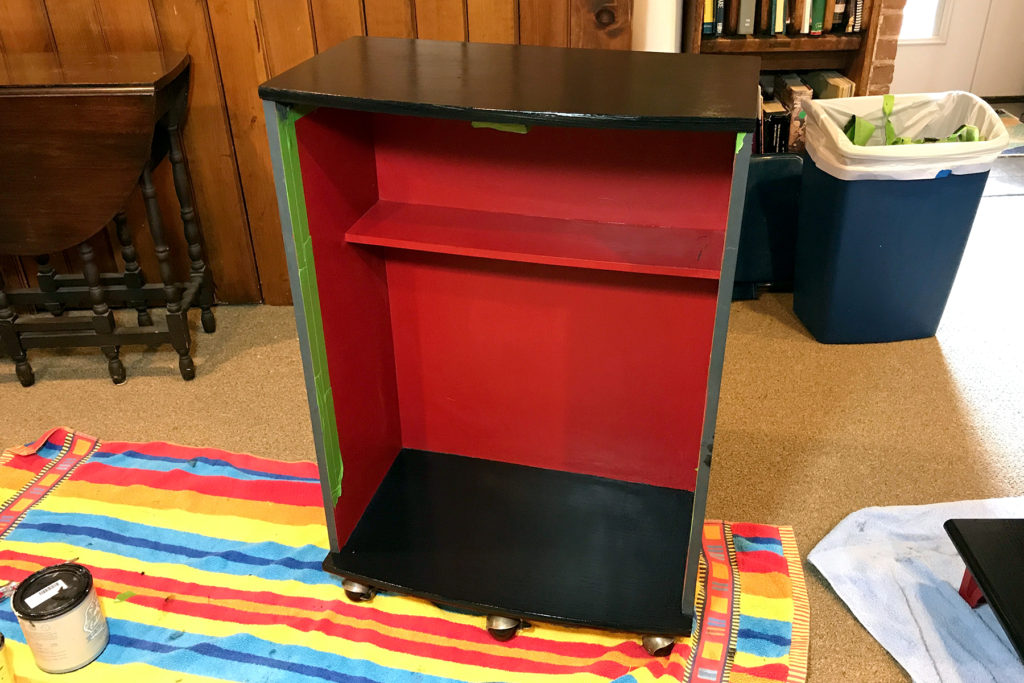 After letting the black glaze dry overnight, I was pleased with the dark, textured look. 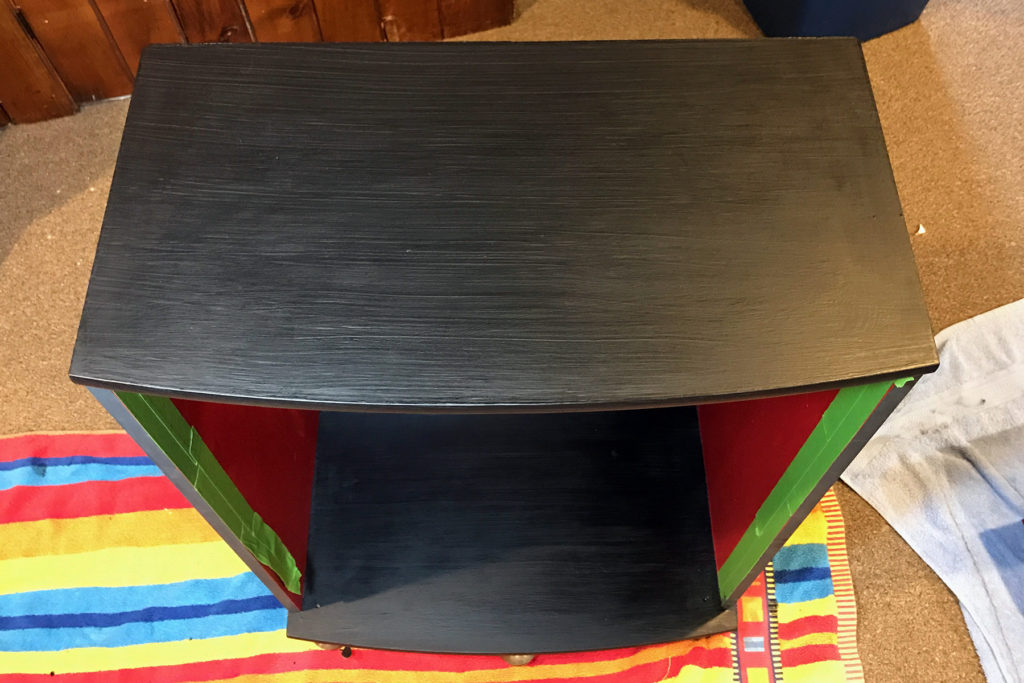 Fortunately I was able to put the whole thing back together again.

Two additions I made were casters and handles. The handles (large cabinet pulls) help maneuver the rolling bar, and they also make a convenient place to drape a towel. 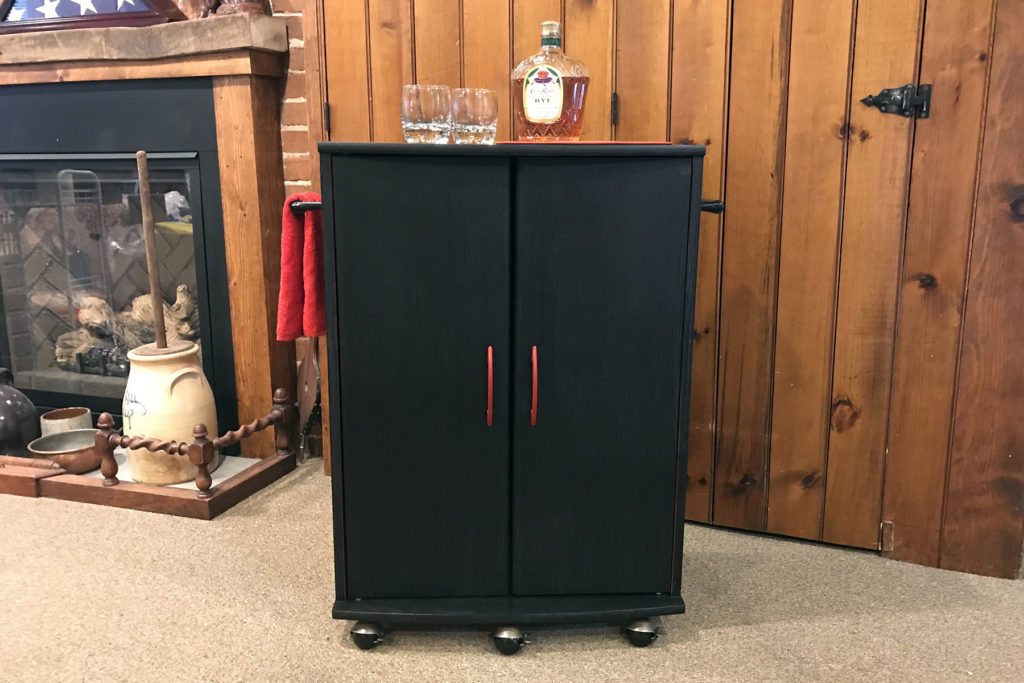 I included a fifth caster in the front to keep the unit from tipping forward when the doors are open. To keep the glasses from sliding around, I cut up some gray rubber shelf liner to fit the shelves on the doors. 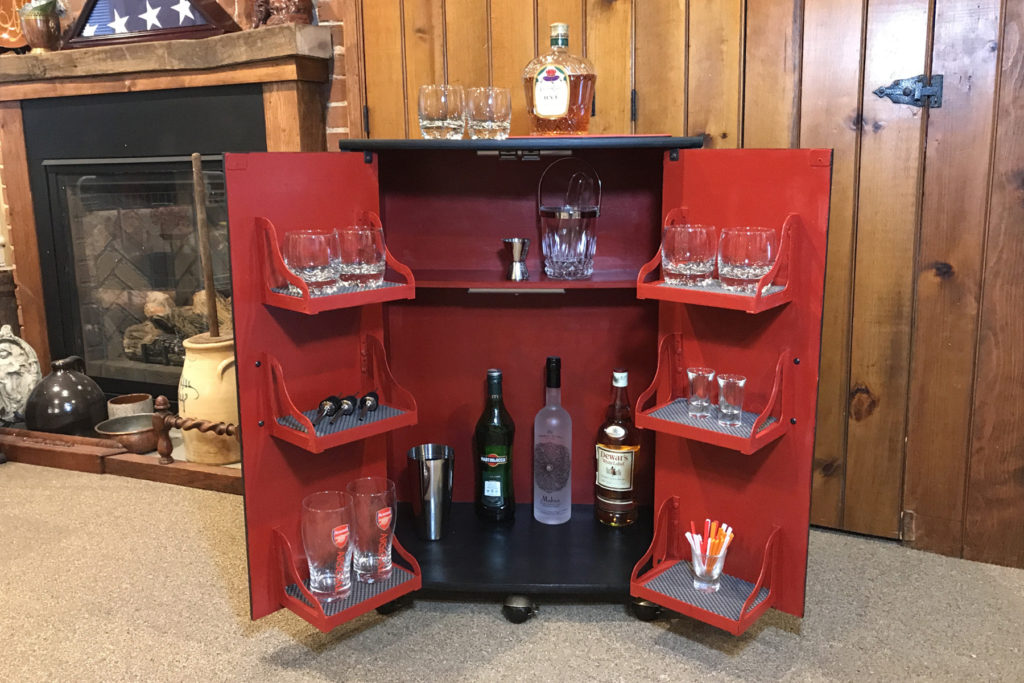 A fun addition was motion sensor lights.  Double-sided tape adheres a metal strip to the surface (one under the top and one under the shelf). The metal attracts and holds the magnetized light. The lights can easily be taken out and put back in. Instead of batteries, they recharge with a USB port. 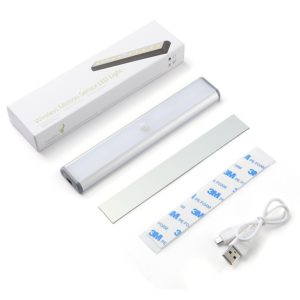 Setting the lights to motion-activation means the lights will go on when the doors were opened. Fun! 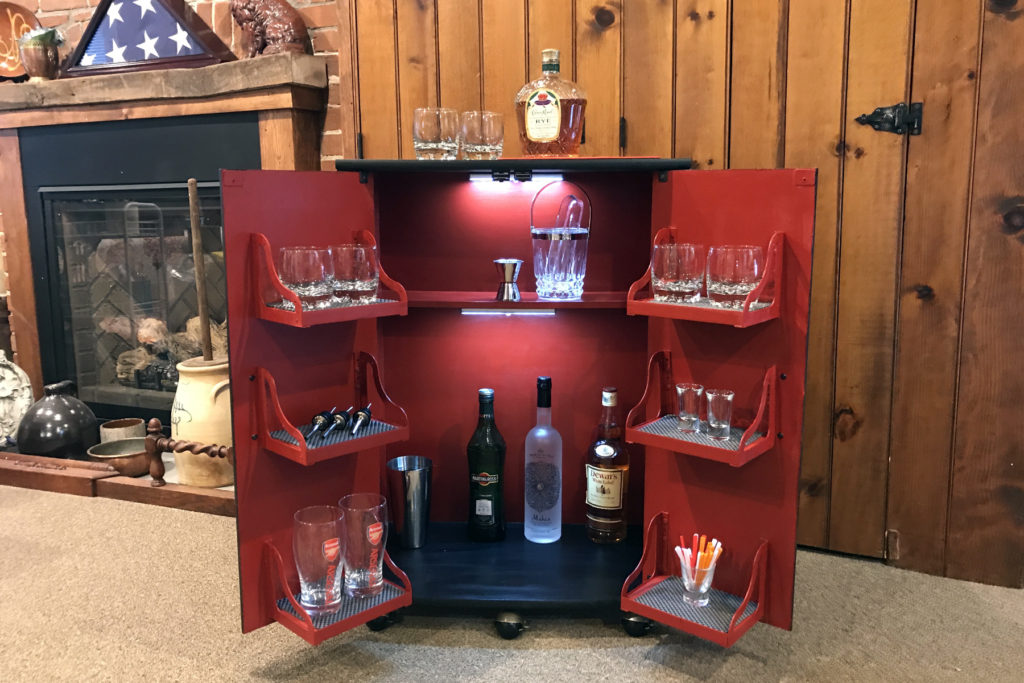 I’m sure my (very) responsible son will enjoy the storage and versatility of his rolling bar cart. And I know exactly what he’s going to ask when he reads this. The answer is, “Sorry, David, the liquor is not included.” (He’ll get a chuckle out of that.) 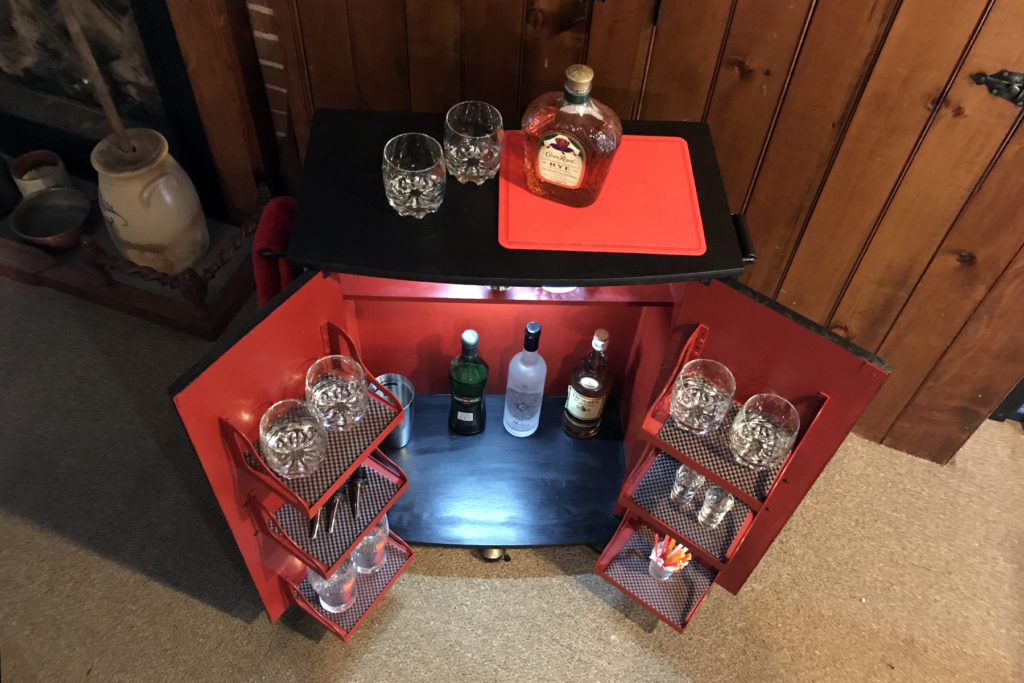 (P. S. Not that I wouldn’t mind, but I’m not paid to endorse any of the products.)