Here’s the second step in my plan to liven up a corner in my living room. You can see the first part in If At First You Don’t Succeed.

I’m not a fashionista but sometimes a new dress with matching shoes makes me feel good about myself. It’s the same with furniture. This old chair I inherited needed a pick-me-up. The slipcover, like an old bathrobe, had to go. 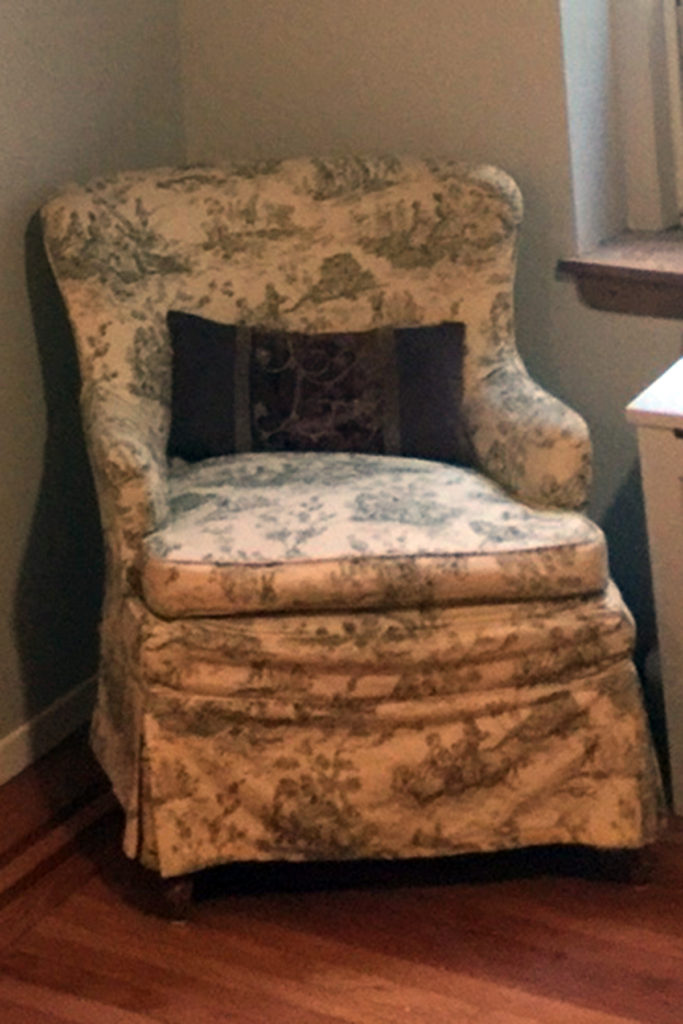 The best thing about an old chair with a slipcover is what you might find underneath. Say for instance, perfectly preserved ivory silk upholstery. Instant new dress! 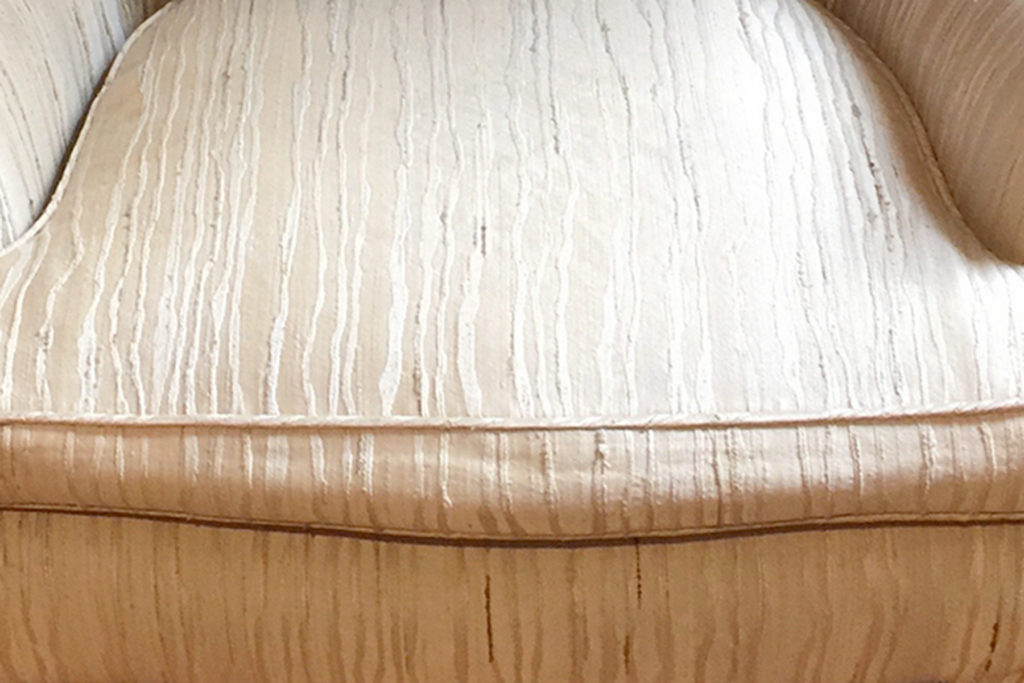 Matching shoes would come in the form of a coordinating footstool. I found the one in the size and shape I wanted  but the owner was stubborn about selling the pair.

I relented but in the end I was happy. It gave me a chance to try on two different outfits. The process of changing the look for each footrest was the same: replace the fabric and paint the legs.

In this case, the footrest is painted with Antoinette over a coat of Paris Grey with the pink sanded down to reveal the grey. Then a coat of clear wax.

Leftover fabric became matching pillows. I cut two identical rectangles, about 2 inches all around larger than the dimensions of the ottoman. I glued the pieces together, good sides facing each other, with a uniform line about a half inch inside the cut. I used Unique Stitch fabric glue, (but if you can sew, go for it. Don’t forget to leave an opening unsewn or unglued to leave room to add the filling. Turn it inside out, stuff it, and close up the opening.

Chair legs can be painted to match the legs of the footrest. (A little Photoshop magic on the legs here.) 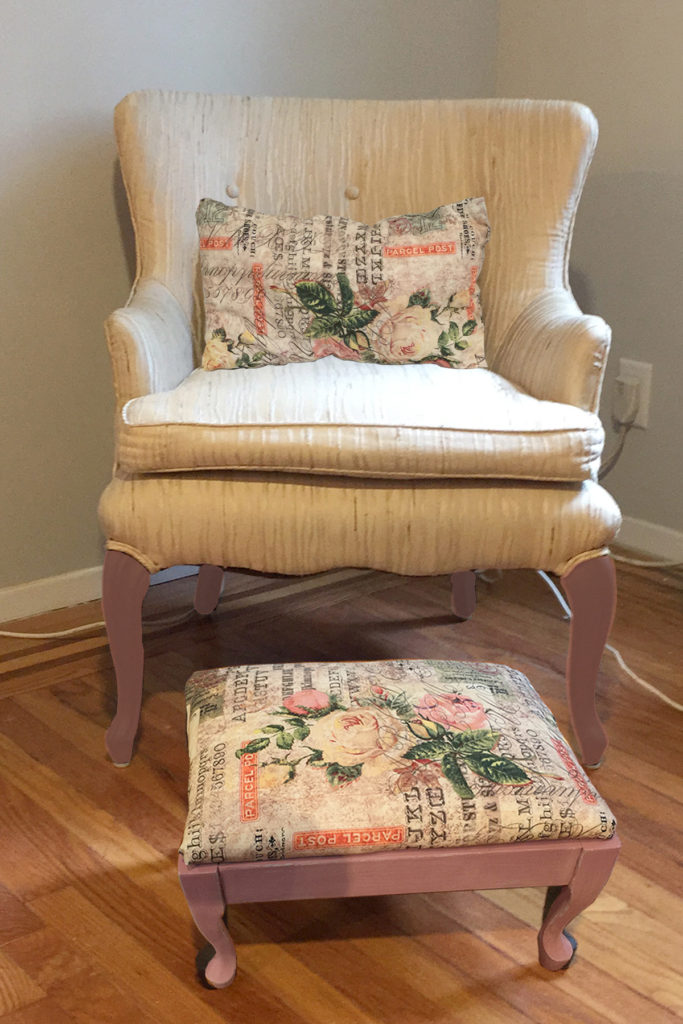 Now for the main ensemble, suitable for an elegant evening. First, on the legs of the chair and the footrest : two coats of Graphite and one coat of Black Wax. 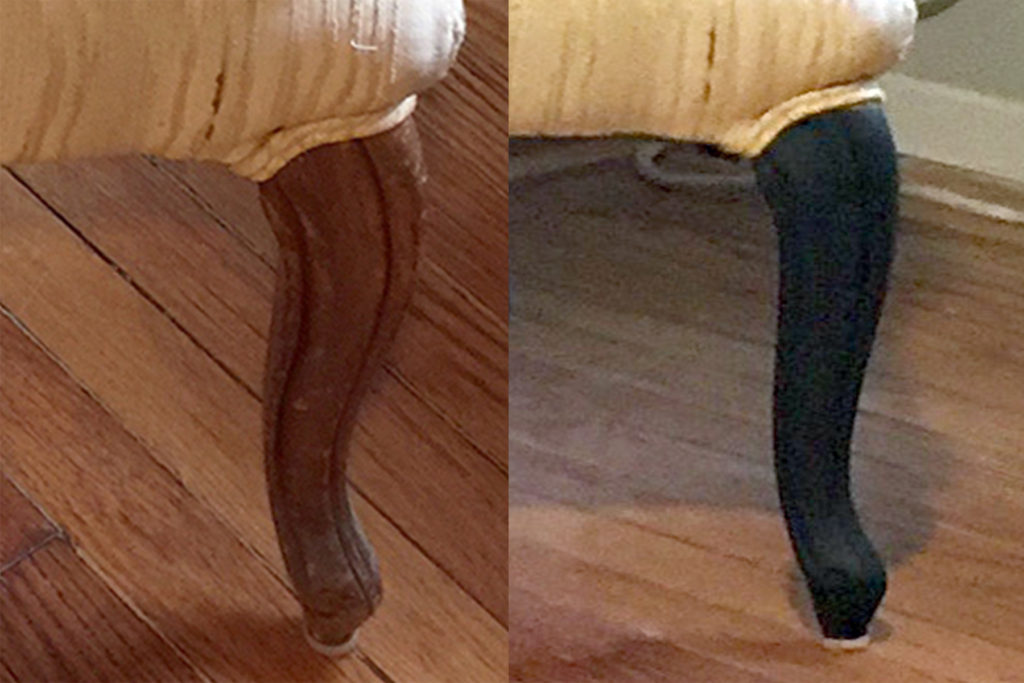 A new dress (upholstery), accessories (a blue velvet pillow), sleek hose (painted legs), and matching shoes (a footrest), will help make this chair a stunner in the corner of an eclectic/contemporary living room. 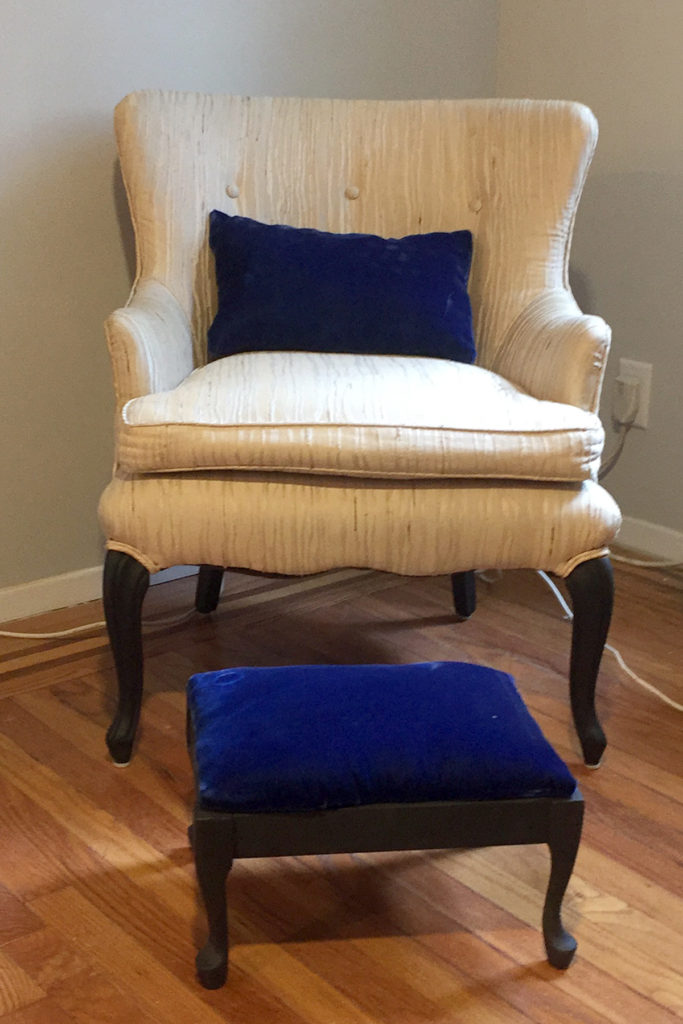 Like the clothes we pick for a mood or occasion, the basic elements of shape, color and accessories define the “look.” 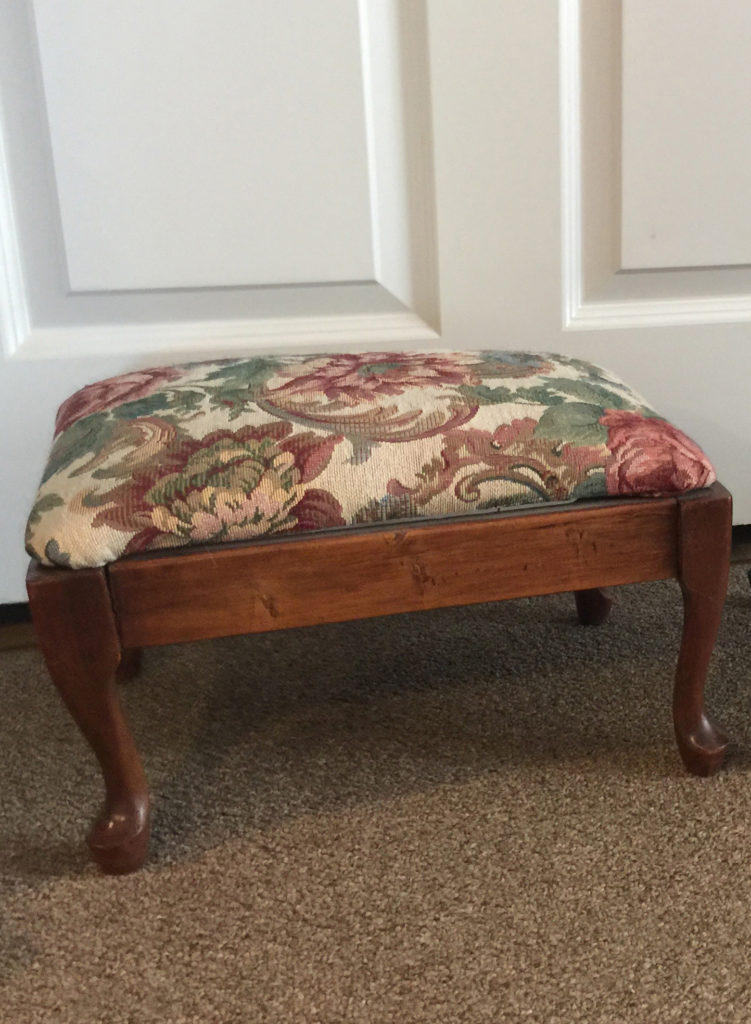 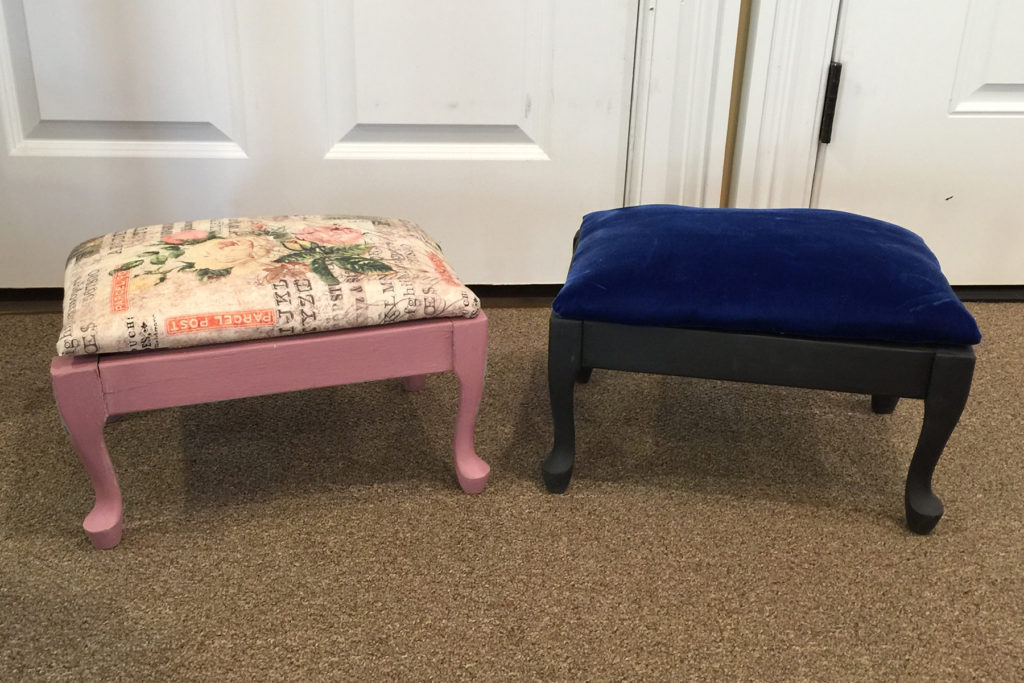 I wanted to make a special gift for my brother and his awesome family. My nieces are talented softball players and my brother and sister-in-law spend countless hours at ball fields watching their girls play.

I looked for inspiration for softball themed make-overs and I found some interesting baseball ideas but they all looked very boyish. Not that I was going to paint something pink and frilly, but really, these girls needed a shout-out.

I owned four benches, which is about three too many. A bench would suit the purpose very well because I’ve watched my nieces play and witnessed the whole family drag themselves, satisfied and exhausted, back home. And when you feel that way, there’s really no place like home. Are catching on to the theme here?

I forgot to take a “before” picture of the bench but I managed to catch it after I sanded the top.

I stained the top, let it dry, and and then flipped it over to drill four holes in the cross bar at the bottom. I made sure they were spaced equally. I can be finicky about things like that. I’ll save the reason for holes for later. I’m sure the suspense is killing you. 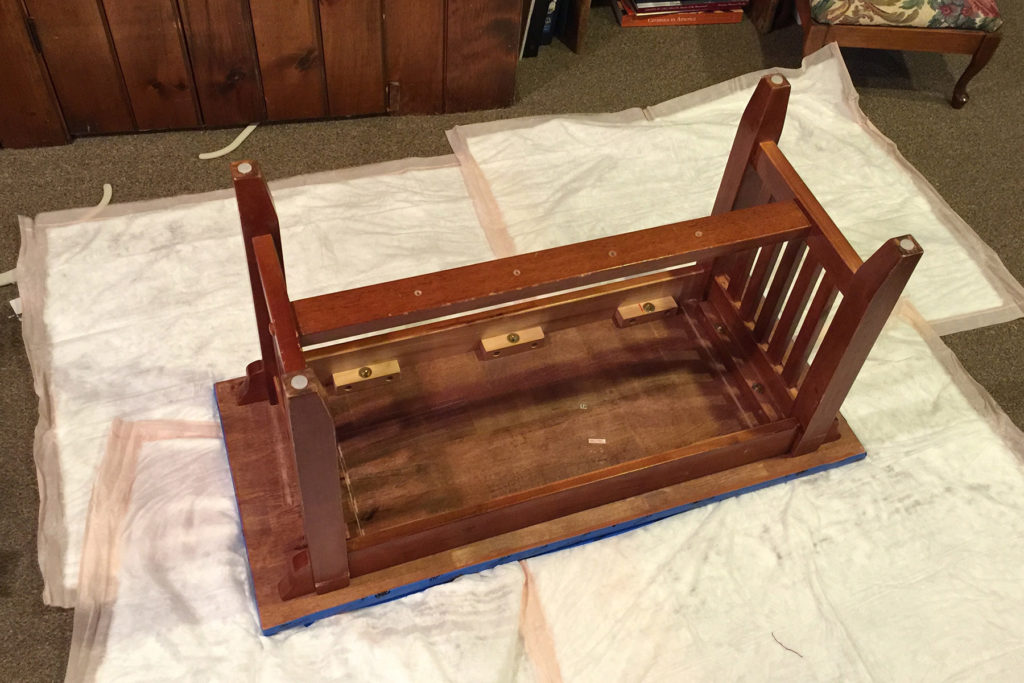 I designed my plan for the top, which included resizing the exact dimensions of home plate. This is another example of how finicky I can be. Now for my brilliant double entendre (stolen from a photo of a doormat). I had mapped it out in Photoshop. Note the guidelines I included.

I transfered the image with graphite paper. 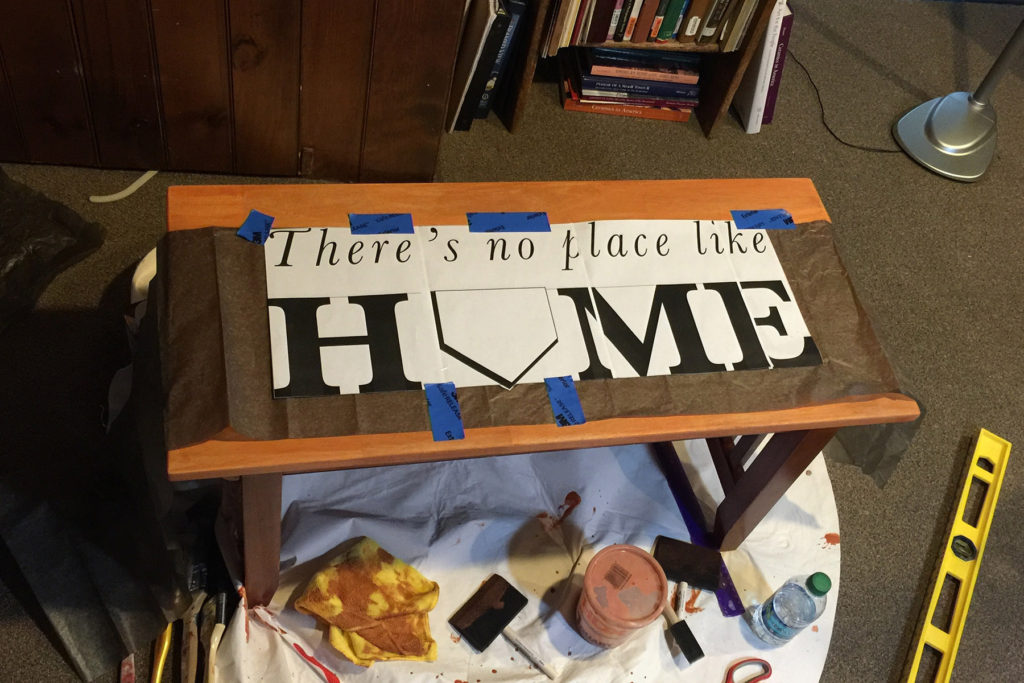 I decided on a paint pen to outline the smaller lettering. The pen was red but on the stained wood it came out kind of pinkish. That wasn’t bad. A little girly, but not too much. I taped around home plate, loving all those straight lines, and painted it Old Ochre. I even “dirtied” it  by dry-brushing a mixture of Old Ochre and Graphite. 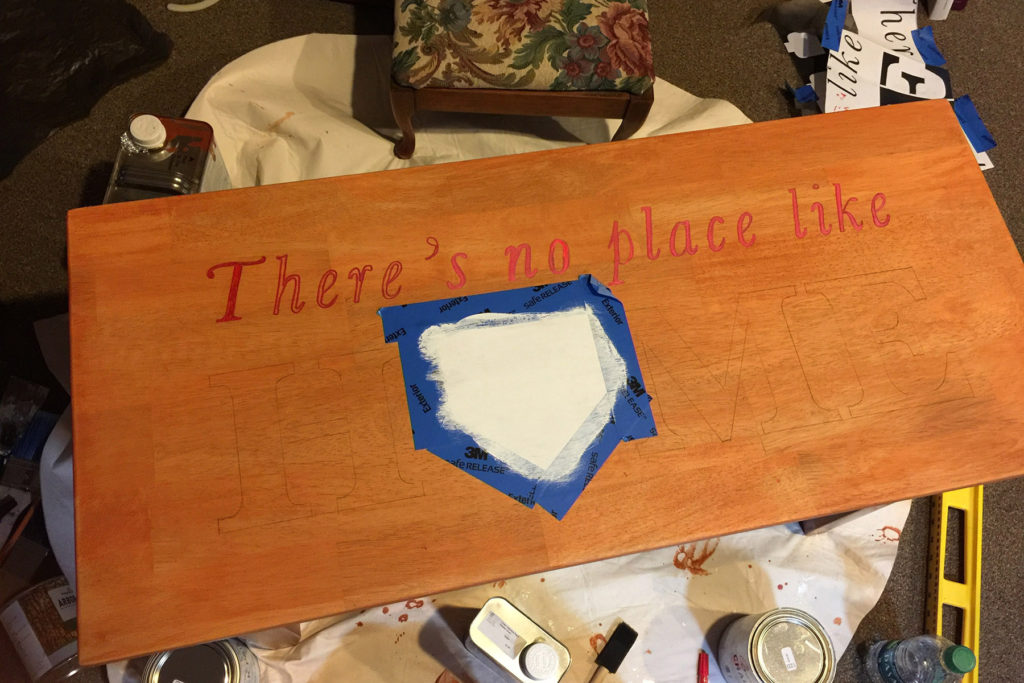 After I was finished patting myself on the back, I painted the H, M and E with Graphite, trying to resist perfection as I swung my calligraphy brush along the curves of the lettering.

I applied two coats of Old Ochre to the base. 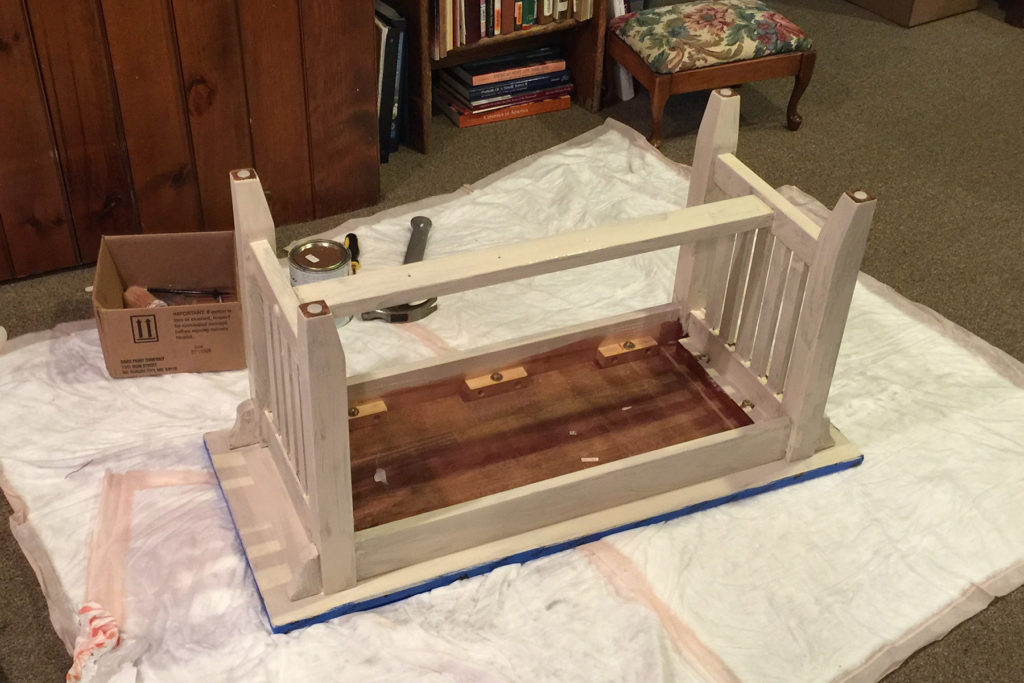 Then I had a sinking feeling, as if I was stealing second and the outfielder was on the ball.

I’d read on the internet that chalk paint would hold up in the great outdoors. You can’t always count on the internet, but you can always count on your coach. I messaged Amanda Peppard, the owner of Suite Pieces. She explained that untreated chalk paint was good-to-go outdoors BUT it wouldn’t protect whatever was underneath. The wood I’d painted was already ready for weather. A hip-thumping slide and safe on second! Thanks Coach!

Remember those four holes I drilled? Are you still dying of suspense? That’s where I screwed four softballs. (NOT baseballs.) I’d pre-drilled the softballs and used a nice long wood screw to attach them from the bottom. 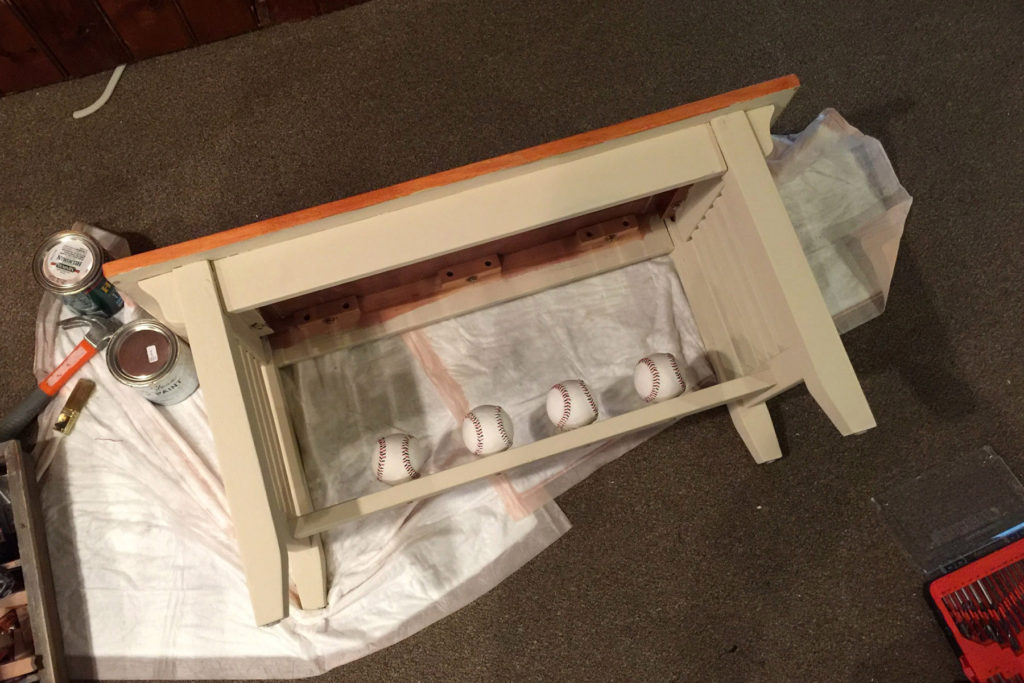 Back in the dugout, my pinkish lettering wasn’t standing out as much as I wanted it to. I took out my paint pens for another pass.

The thing about paint pens is that you have to shake them once in awhile and, like banging the dirt off your cleats with a bat, the stuff flies everywhere. I tried removing a few but the stained wood had absorbed those little paint bombs. A swing and a miss. Pass the Gatorade. 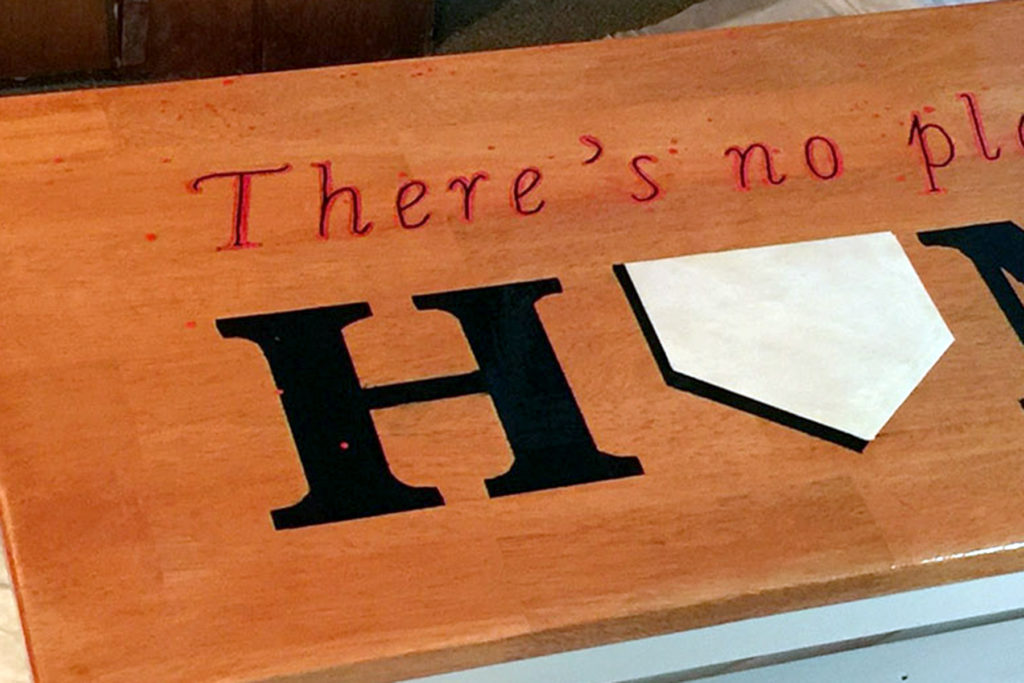 I gave up and sealed the top with two coats of polyurethane, paint bombs and all. 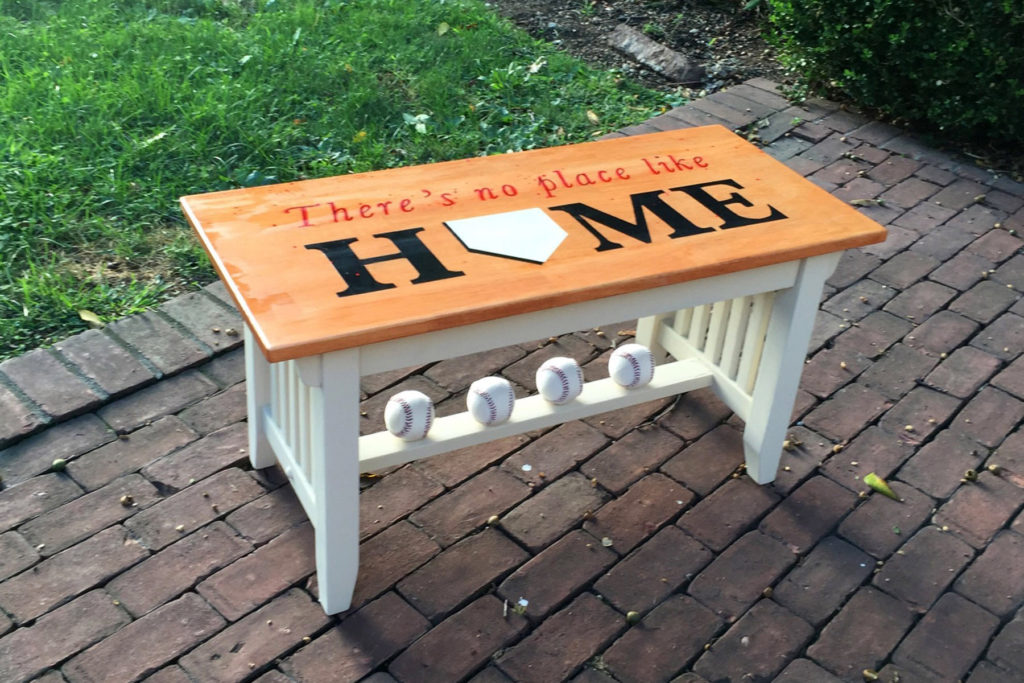 I surprised my brother and his family with their bench after a double header. They were thrilled and amazed. Thrilled and amazed always gives me a good feeling, especially when it comes from my sports idols.

I pointed out my imperfect pink dots to my sister-in-law. She asked me the most amazing question. “Do you know what the enemy of “good’ is?” My 15-year-old niece chimed in before I could even begin to think of an answer. “Better!”

P.S. Did you know that before Judy Garland stamped “There’s no place like home.” on our hearts in The Wizard of Oz,  the chart-topping song in the 1800’s was “Home Sweet Home”, which includes the same phrase–over and over again?

I spotted him by the side of the road. He was worn and weary but what a physique! It was crazy, I know, but I took him in and let him stay in the basement. He kept to himself for a long time until one day, as I carried a basket of laundry to the washing machine, our eyes met…

Okay, enough of this gushy stuff. You know I’m talking about a table, right? Annie Sloan Coco. That’s his color, not his name. I don’t name my furniture and if I do, I guess I should keep it to myself.

For the sake of discretion, a photo of my forlorn and naked companion is not included. (In other words, I forgot to take a “before” picture.) I adorned Coco—I mean, the table—with two coats of his namesake, intending to shower him—I mean, it—with diamonds.

No, not real diamonds, diamond shapes, aka Harlequin. I laid the pattern out on my computer. Hate me for loving geometry? Don’t worry. You’ll have the last laugh.

I used one quarter inch painters tape so it would come out just like the picture. But it didn’t. I turned to my trusty T-square and marked out rectangles with a watercolor pencil. 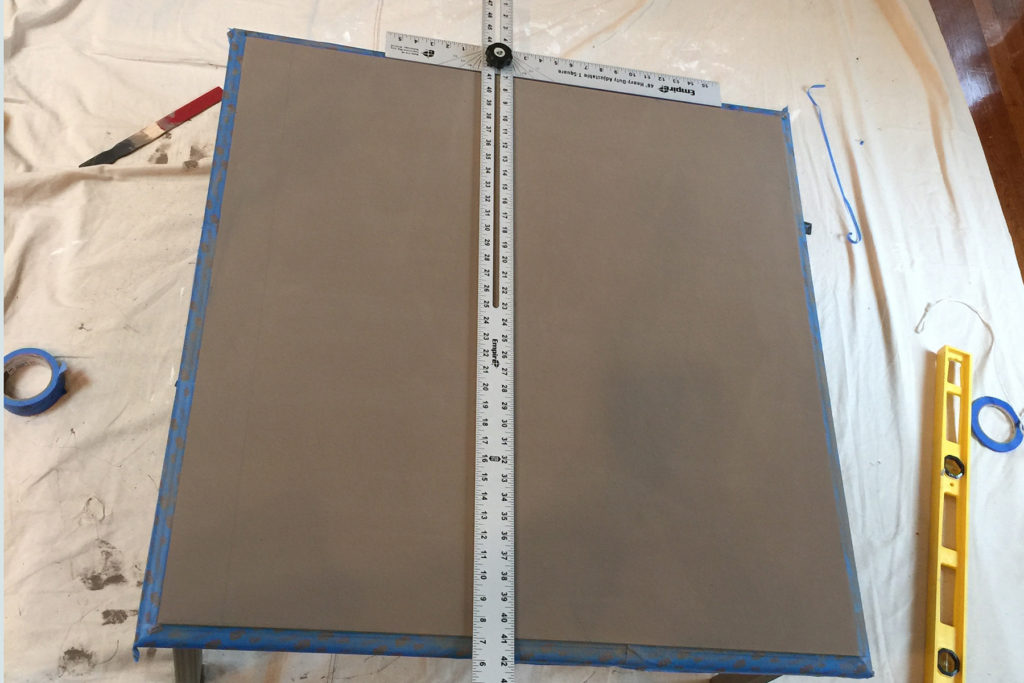 I still didn’t get exactly what I wanted. My frustration was growing as big as the ball of discarded painters tape. I won’t go into details because the next time I do this I’ll position the diamonds with templates and trace them across the table top.

At last the Coco table had its diamonds. I marked the ones that wouldn’t be painted. Notice all the lines I had drawn with the watercolor pencil? Mostly mistakes. 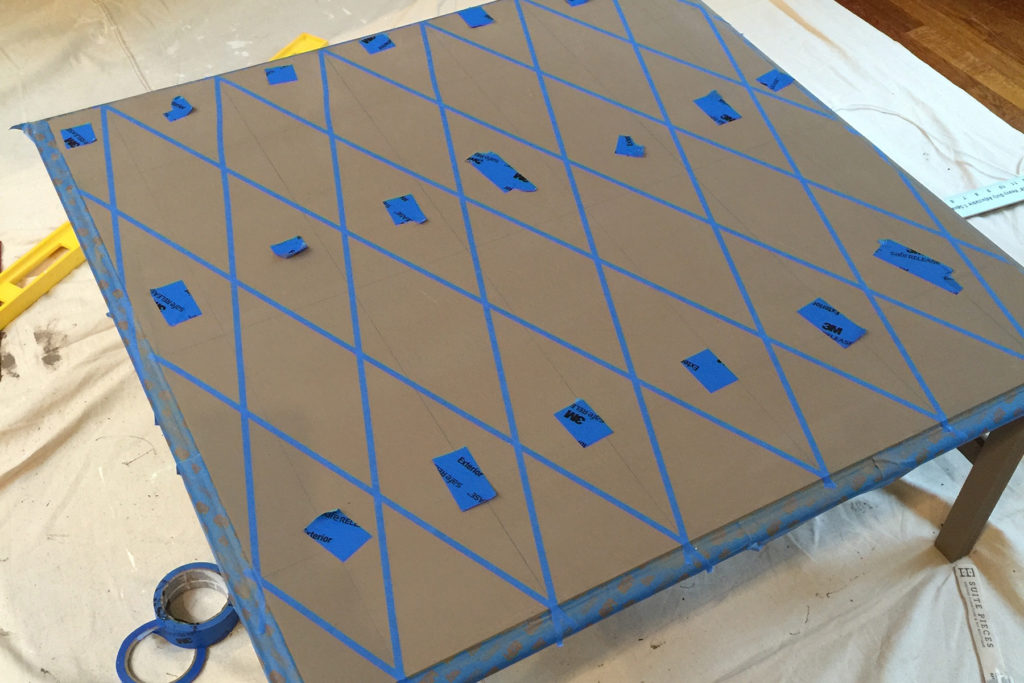 Unmarked diamonds got one coat of a mixture of two parts Coco and one part Pure white. Because the tape was so thin, I had to be very careful painting the lighter color. 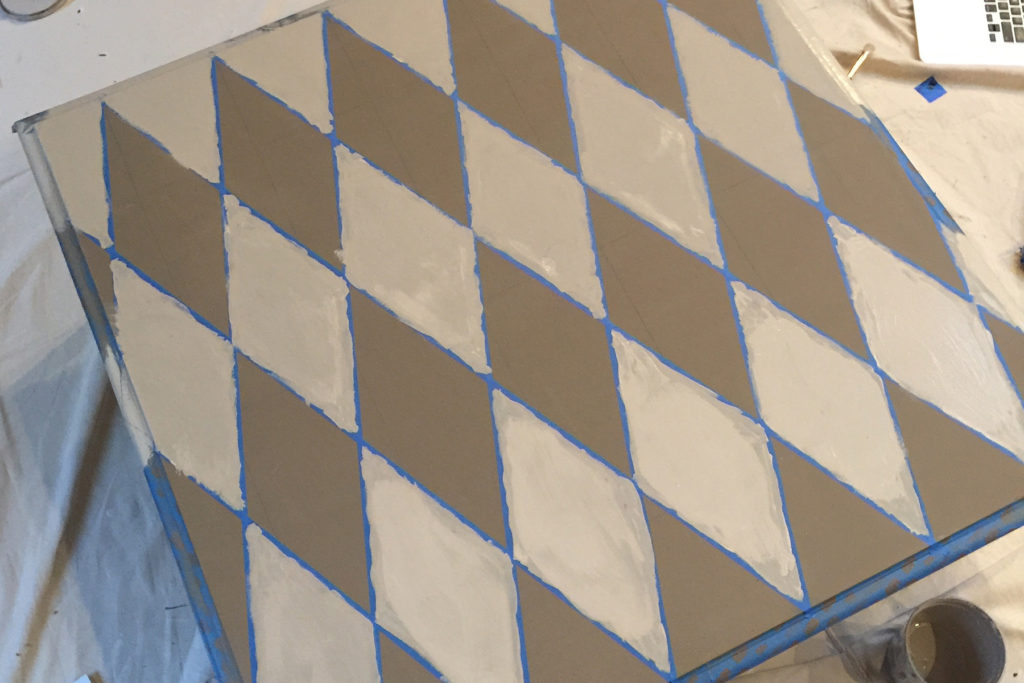 When I was finished I had a heck of a time washing the pencil off and sometimes had to paint over it. 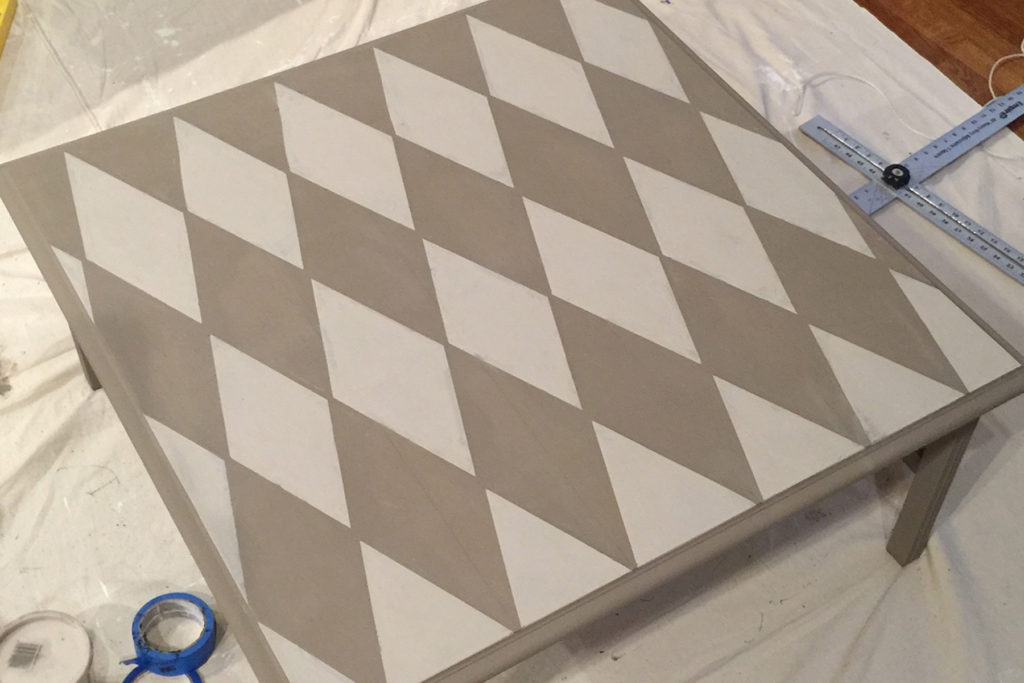 By lightly sanding the top in the same direction, point to point, I muffled the imperfect lines and made the lighter diamonds look like my uneven paint job was by design.

I applied white wax to highlight those sexy legs. 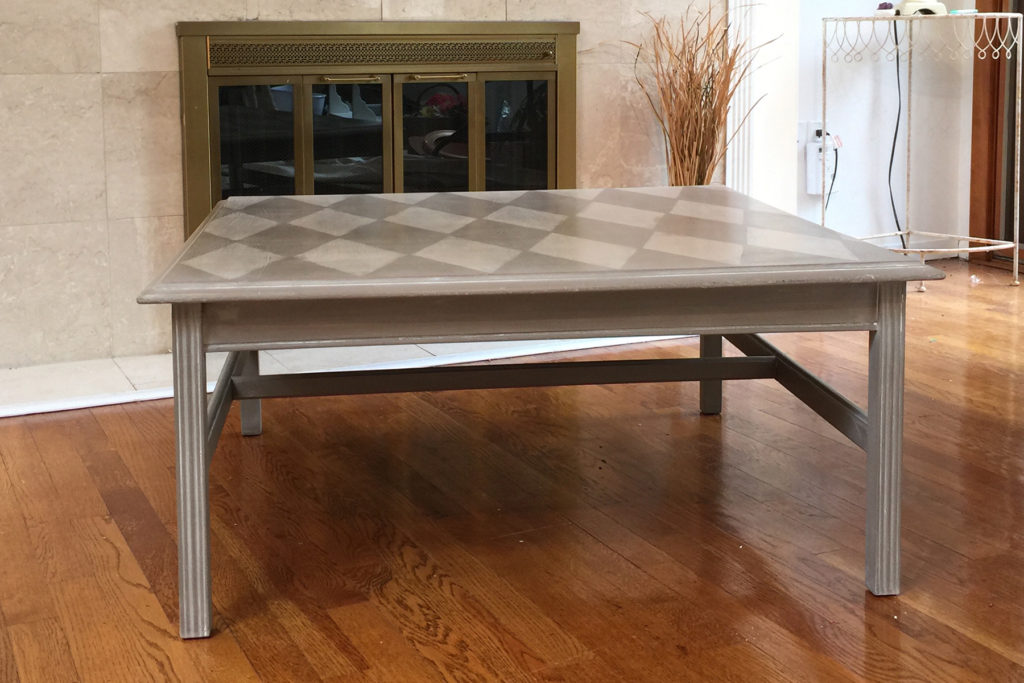 If you’ve been fortunate enough to shop for real diamonds, you’ll know that the fewer the imperfections, the higher the price. My find and me, we cared more about pretty than perfect. True love! 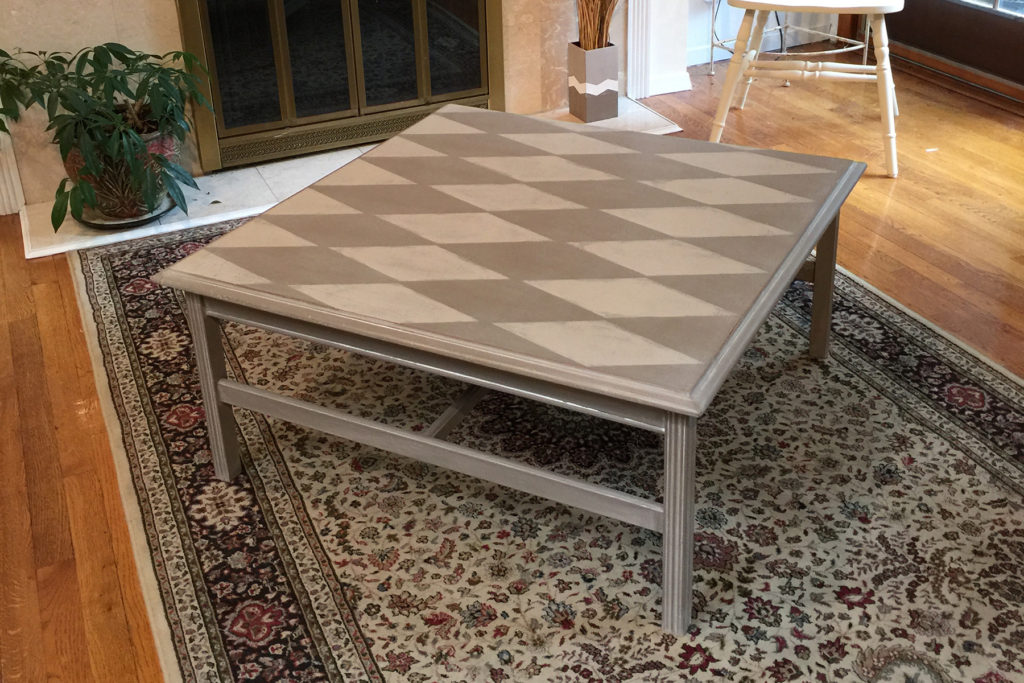 Happy was the heroine.