An antique dealer told me rocking chairs were dead. Dead??? It seems as a society we’re more prone to hunch over a computer then sit back and relax.

But not all of us! When a friend spied my old rocker, she sank into it and closed her eyes. What was her favorite color? Blue. Old rocker, new paint, happy friend. Done deal!

First I tried Aubusson Blue but I felt it was too light. The nicks and scratches would remain part of the character of the chair but wouldn’t be as prominent with a darker color. I chose Napoleonic Blue. 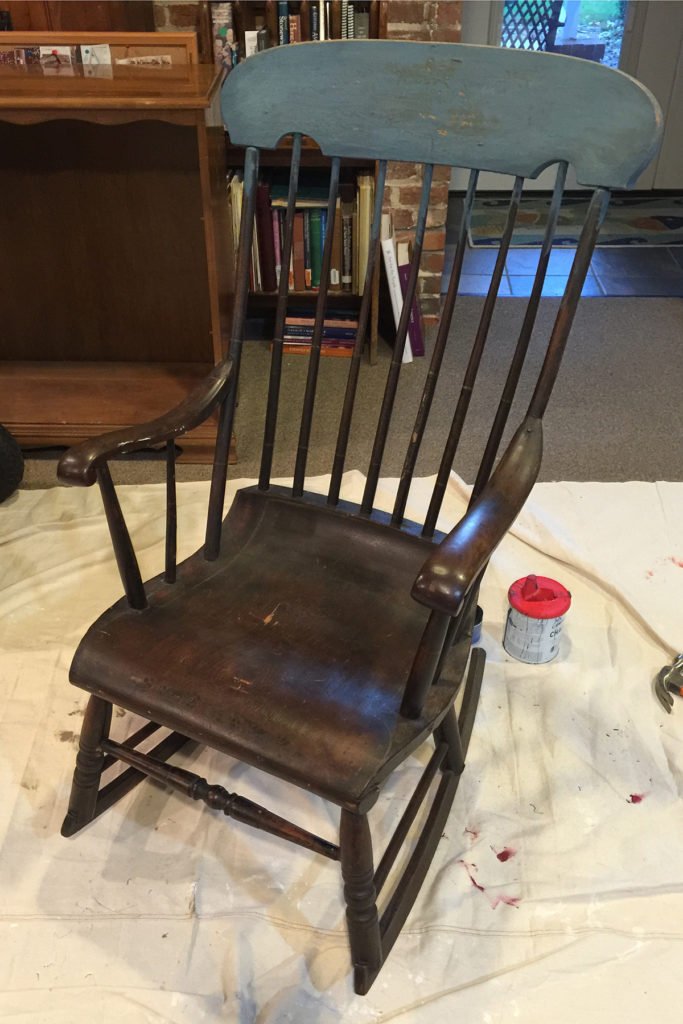 It turned out the rocker needed more glue than paint. It was obvious that it had already been glued a few times in the past. I used wood glue where I could and squeezed Gorilla Glue Original (like Krazy Glue) into the smaller joint crevices. It wasn’t always pretty but it held the joints well enough to quiet the creaking. 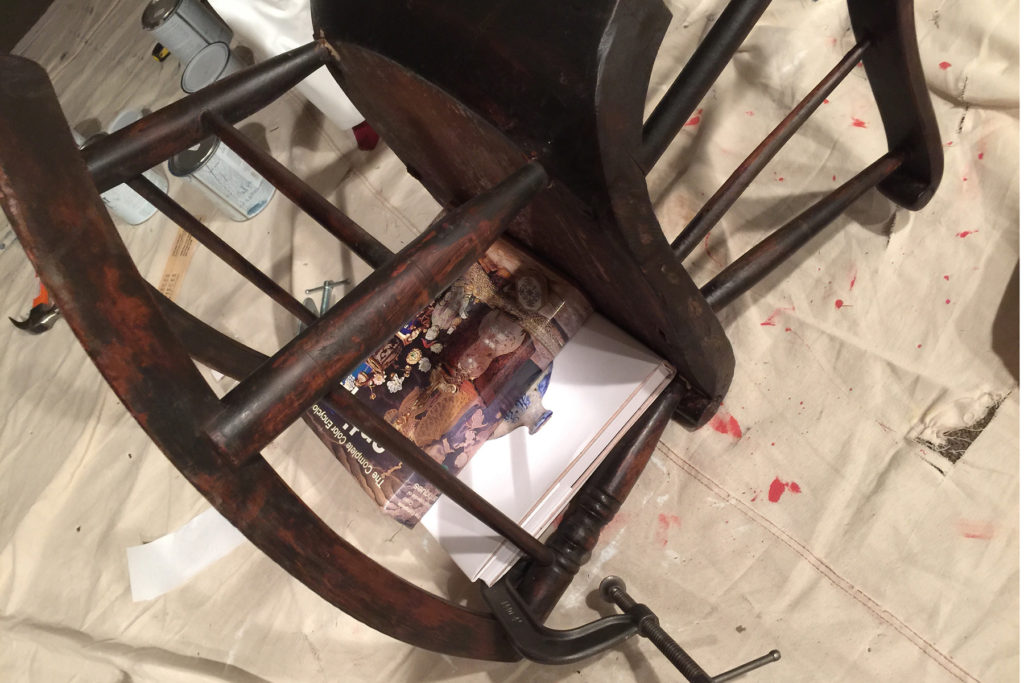 I somehow managed not to glue my fingers together.

A girl scout song helped me choose the accent color. “Make new friends but keep the old. One is silver and the other’s gold.” After two coats of Napoleonic Blue, I gave my old friend a wink with touches of gold.

First up, a gold stripe on the spindles. I positioned two long strips of Frog Tape (my favorite painter’s tape) in nice even lines across the bars, then cut in between so that I could wrap the tape around each spindle. 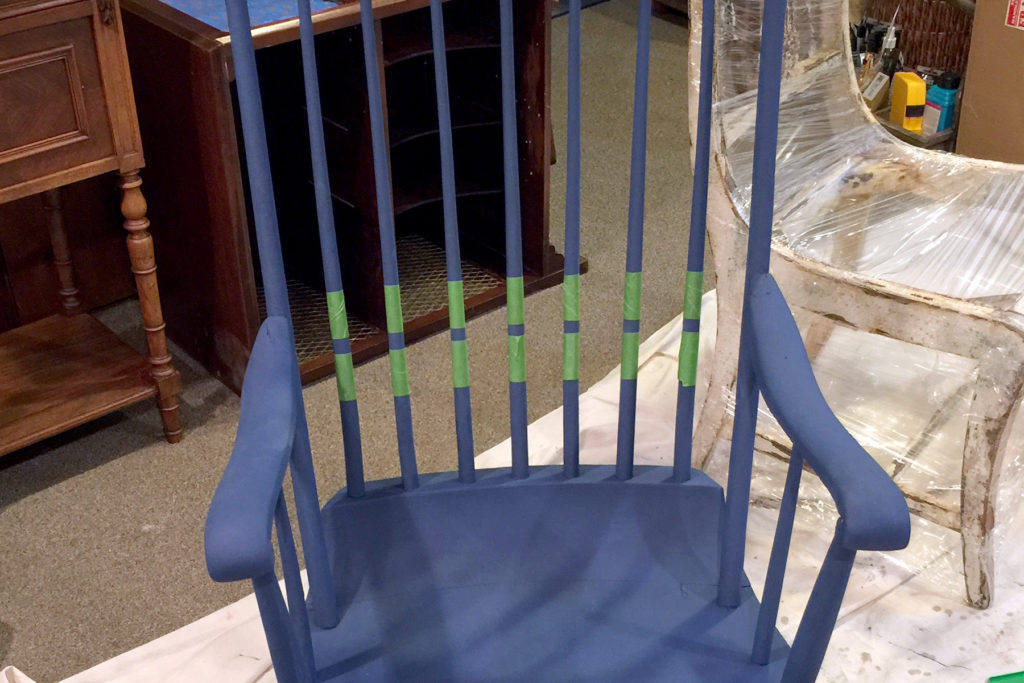 The gold paint of choice was Modern Masters Metallic Paint, Olympic Gold. At Suite Pieces, I got a little friendly advice about this paint.  It works well over chalk paint but direct application to wood requires more prep work. It’s oil-based and needs mineral spirits or paint thinner for clean-up.

I stenciled a leaf design on the left and then flipped the stencil for a mirror-image on the right. Positioning was trial and error but as you can see in later photos, I think I got it pretty close. 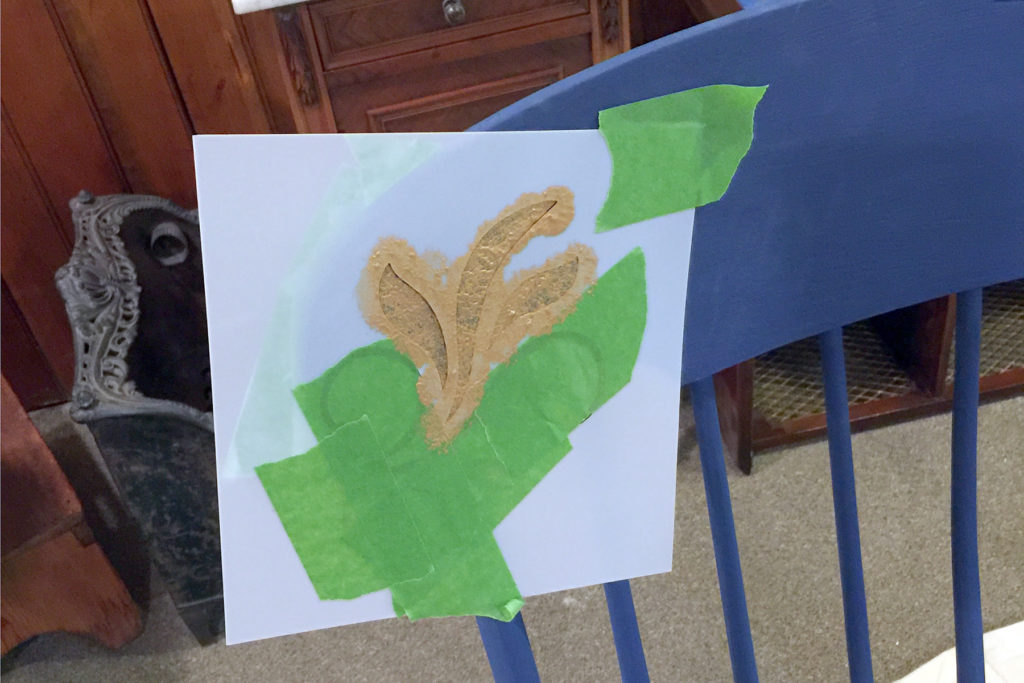 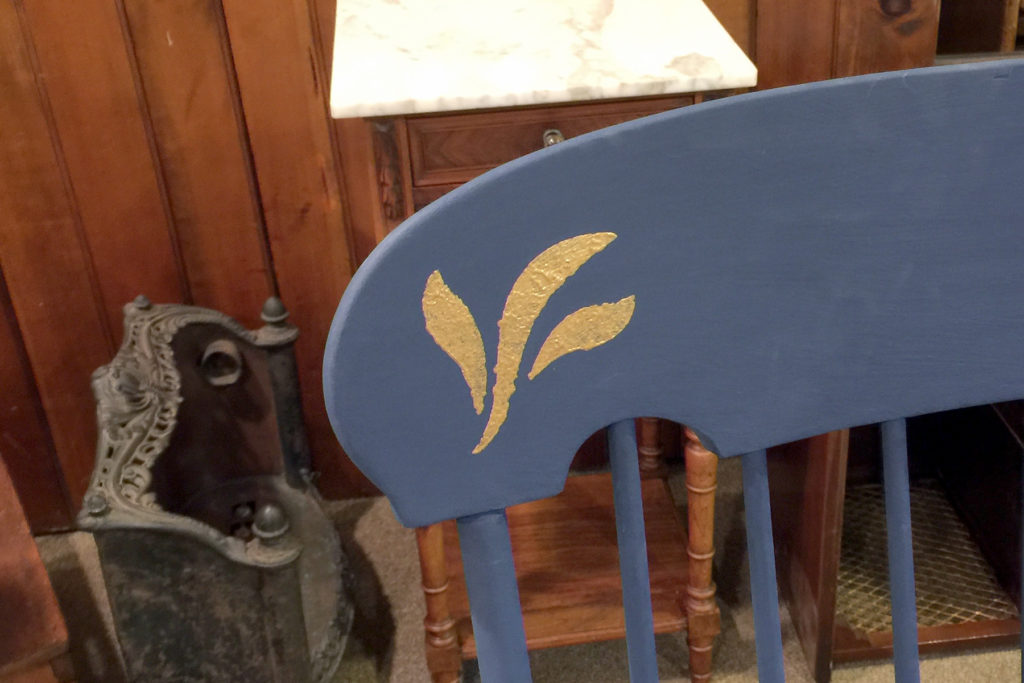 I used the same stencil for gold leaves on the arms. I made my own design using two different leaf shapes on the stencil, and cut a paper template to make positioning them easier. 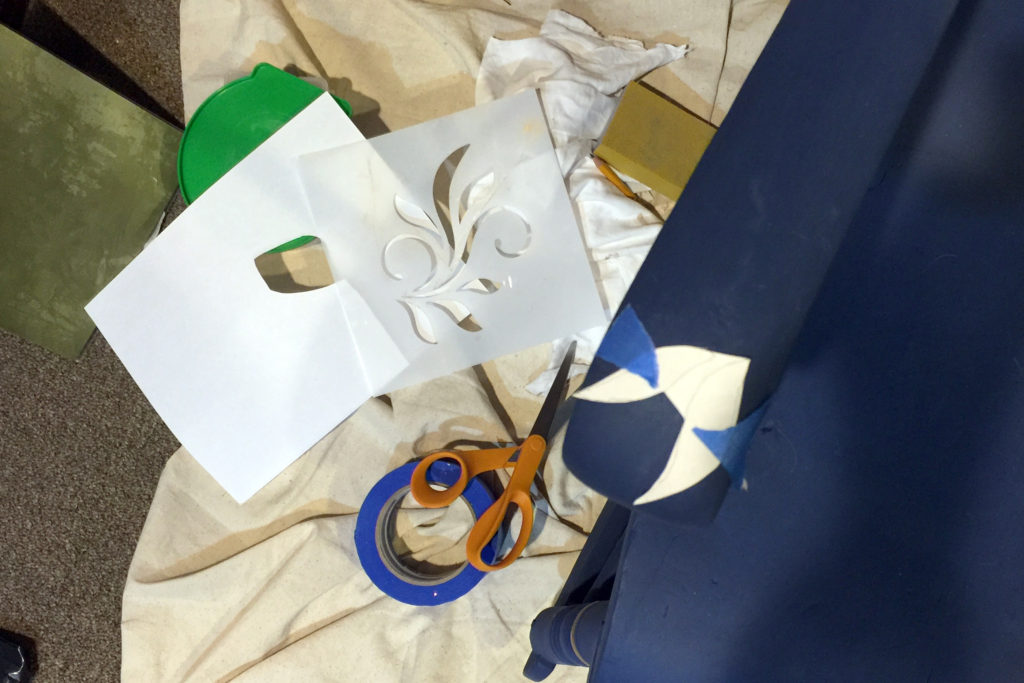 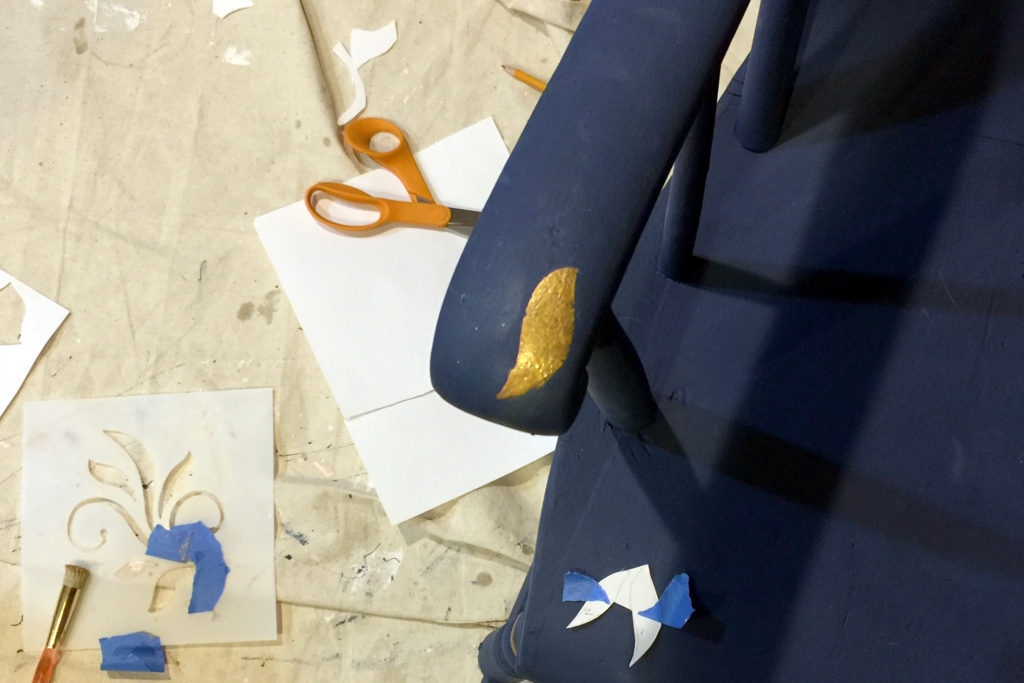 Another long strip of painter’s tape helped align the template and the (flipped) stencil on the opposite arm. 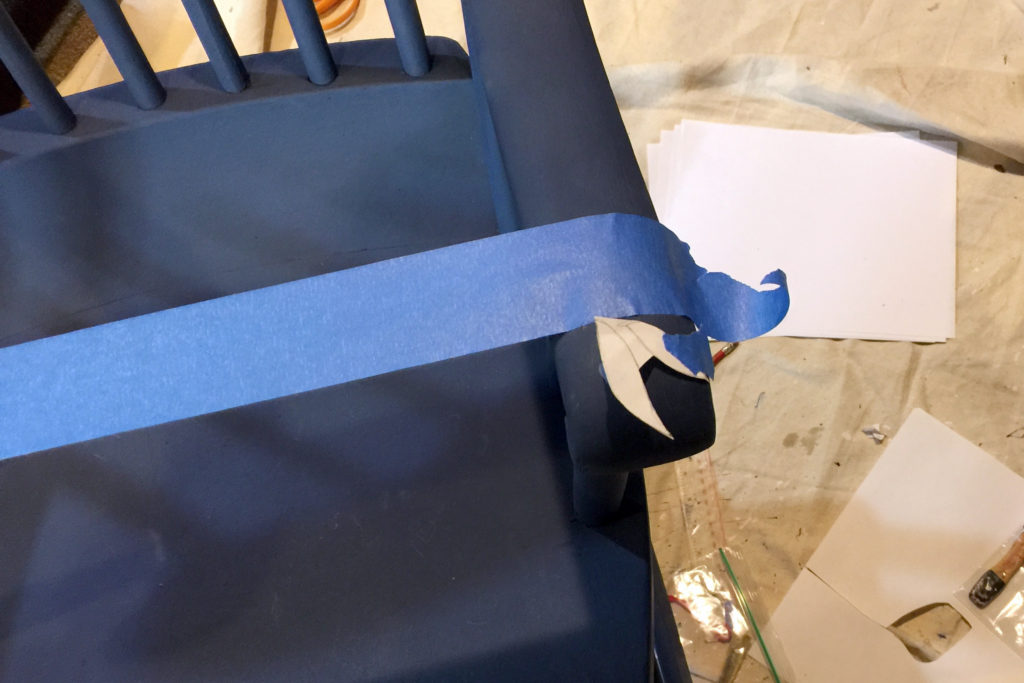 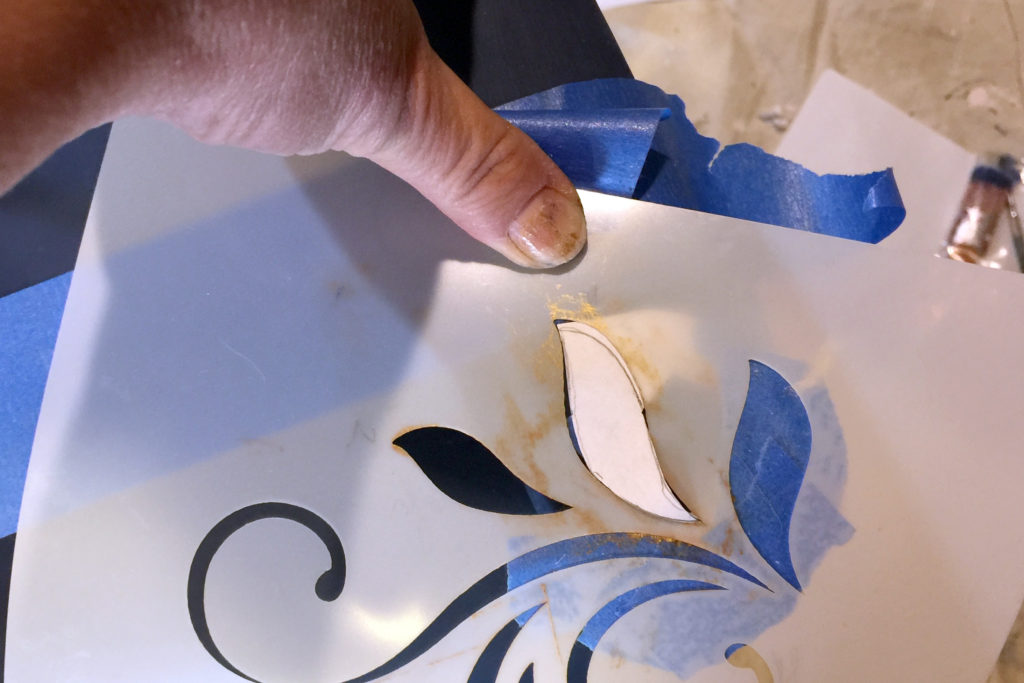 How did a picture of my mother’s hand get in there? Oh, that’s my hand.

I hand-painted some gold lines in the grooves of the legs and crossbar and gave the whole chair a coat of Clear Wax. 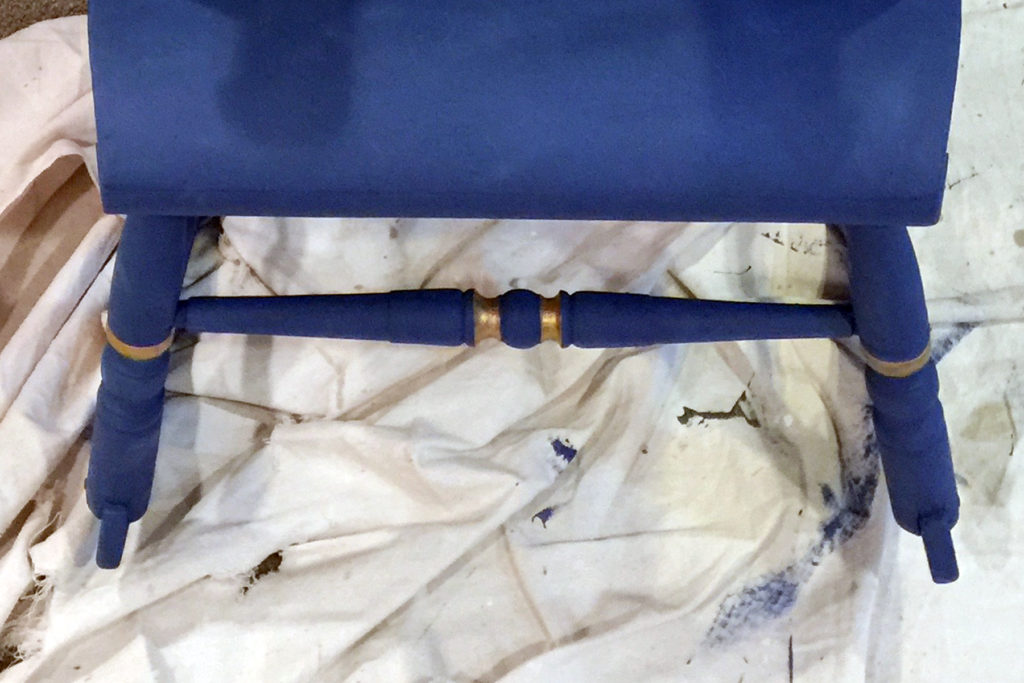 I gave the rocking chair a long and luxurious test run by the fireplace. 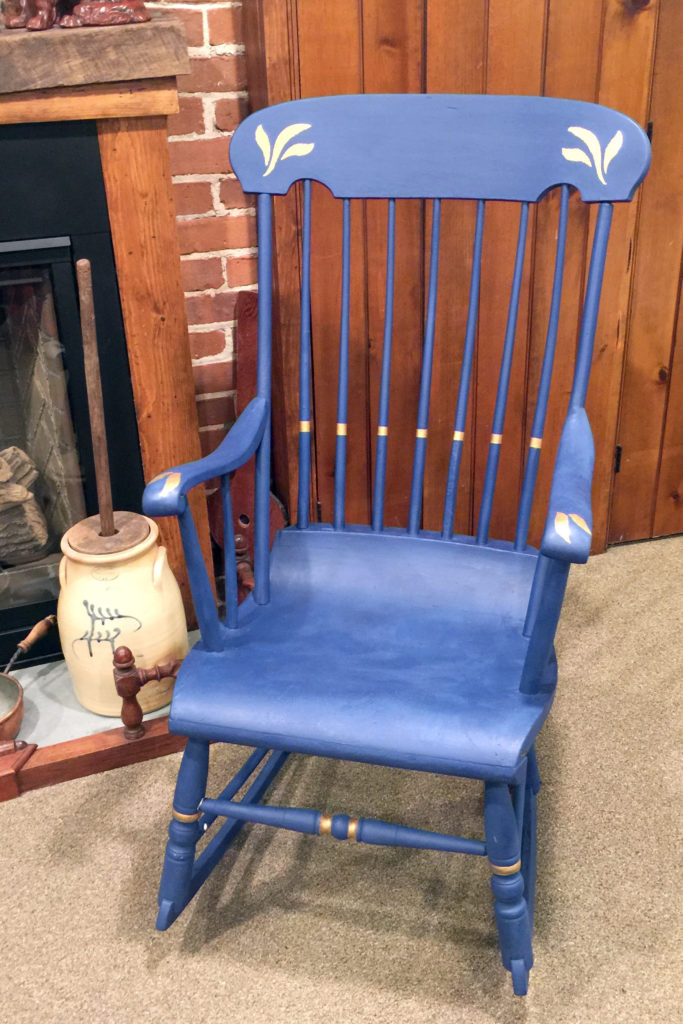 Maybe I can give the rocking chair a new life by calling it a meditation device. Batteries not required.